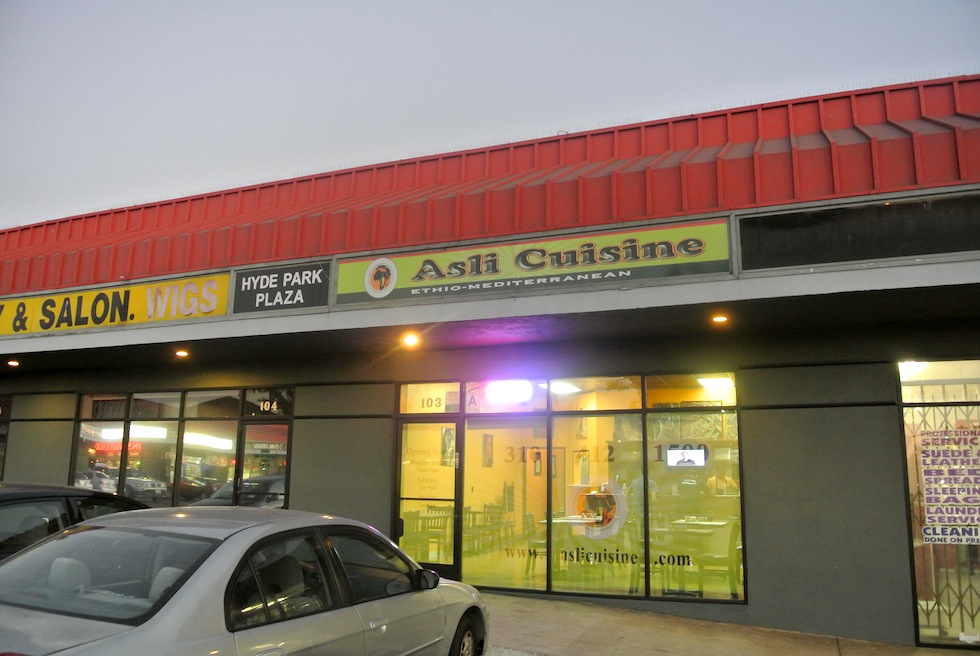 Chances are if you’ve ever eaten Ethiopian food in Los Angeles it occurred on the stretch of Fairfax between Pico and Olympic officially known as Little Ethiopia. Restaurants, markets, and colorful shops line both sides of the street as the fragrant aroma of spices seems to follow your car as you pass by. My own introduction to Ethiopian cuisine took place just a couple of blocks west of Fairfax at a restaurant called Awash, where I discovered kitfo (think a heavily-spiced steak tartare), tibbs (cubes of seasoned beef sauteed with onions and jalapenos), and that magical spongey bread injera. That was six or seven years ago, and aside from trying a few other places during that time Awash has remained my favorite Ethiopian restaurant, the place that I always recommended people try for their first time. However, that all changed recently when a good friend (who happens to be Ethiopian) took me to Asli Cuisine, a newly opened restaurant where I experienced Ethiopian food in an entirely new light.

Asli Cuisine begins and ends with chef-owner Fuad Afifi, a passionate man whose chief concern is ensuring that his customers (a term that’s almost unfair because everyone who eats there is treated like extended family) have the best possible dining experience. Born in the eastern part of Ethiopia, Afifi began cooking at an early age after wanting to help his mother, who had fallen ill, with her daily duties. As he grew up he experienced serious struggle and hardship, at one point forced to beg for food. However, it was during this difficult period that he experienced how the soul could be touched by the simplest things, like being offered a piece of bread while starving. After moving to the United States and doing catering and private cooking, Afifi finally opened his own restaurant built on the idea that he could connect with people, maybe even make a difference in their day, by cooking for them and nourishing their soul.

Where as a majority of the Ethiopian food in Los Angeles comes from the northern part of the African country, Afifi’s upbringing on the eastern side brings with it influences from India, the Middle East, and Italy. One notable difference between the north and east, he explained to me, is that rice is non-existant in the north, hence the use of injera with every meal. At Asli, the menu features both Ethiopian staples and Mediterranean inspired dishes that showcase Afifi’s versatility in the kitchen and his vast culinary knowledge across cultures. Ordering from the menu is fine, but I’ve found that leaving it up to Afifi is often the smarter move, allowing him to personalize each meal to accommodate varying tolerances of spicy, as well as any vegetarian (and soon vegan) needs. 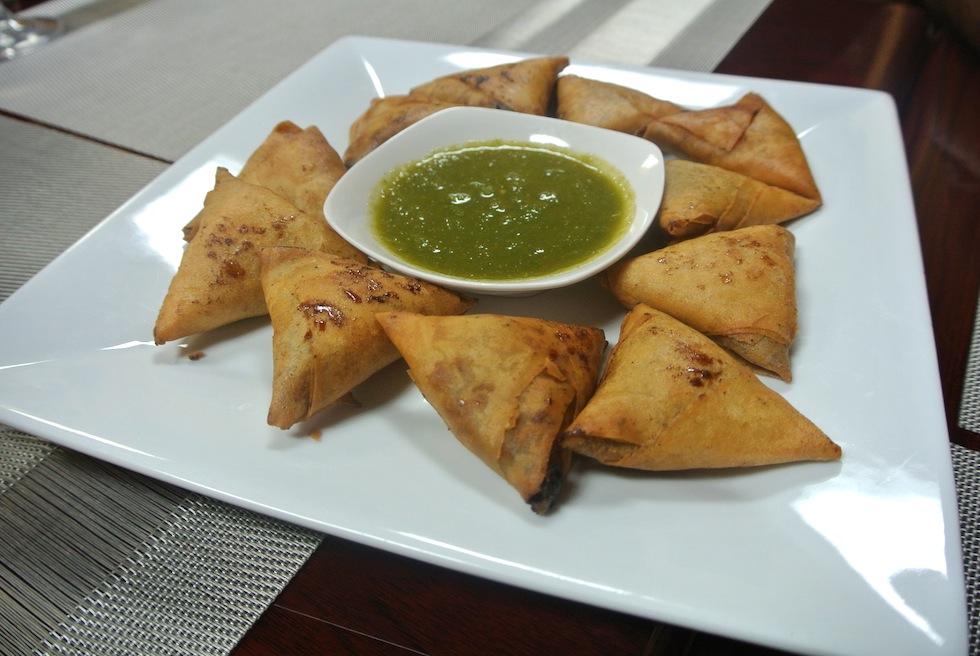 We started the meal with a plate full of sambusas, a fried snack commonly served at holidays and special occasions. The ones here were light with a pleasant crunch, and came filled with seasoned ground beef and vegetables. The green sauce gave the dish some needed color and carried with it a good bit of heat. 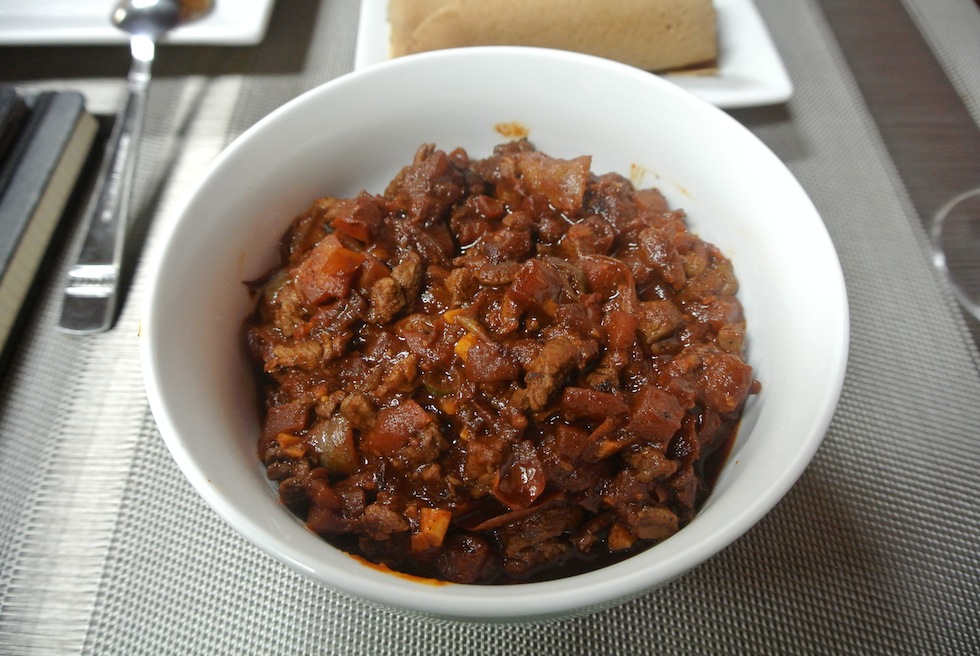 Awaze is an Ethiopian marinade comprised primarily of the spice mixture berbere, an Ethiopian staple. Here, the awaze was applied to cubes of tender beef alongside onions and tomatoes for a stew-like dish. Despite the foreboding deep red hue, the dish was more flavorful than spicy. 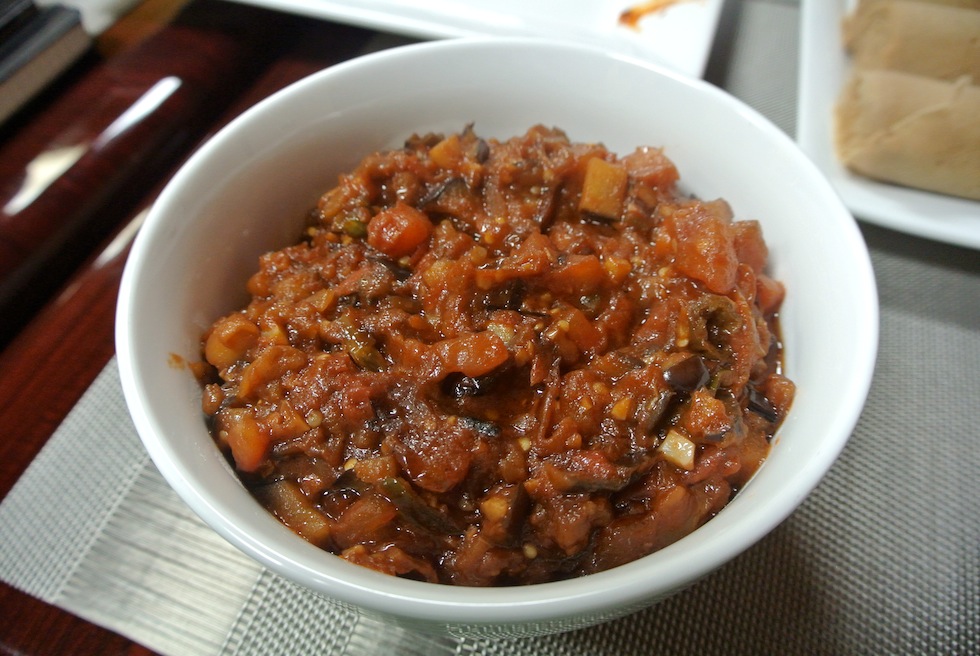 Initially I thought the kitchen had sent out a duplicate of the awaze tibbs, but in fact what we had here was a bowl of hearty eggplant. Cooked to perfection, the eggplant was delectably soft, while the acidity of the tomatoes in the dish provided a nice compliment. 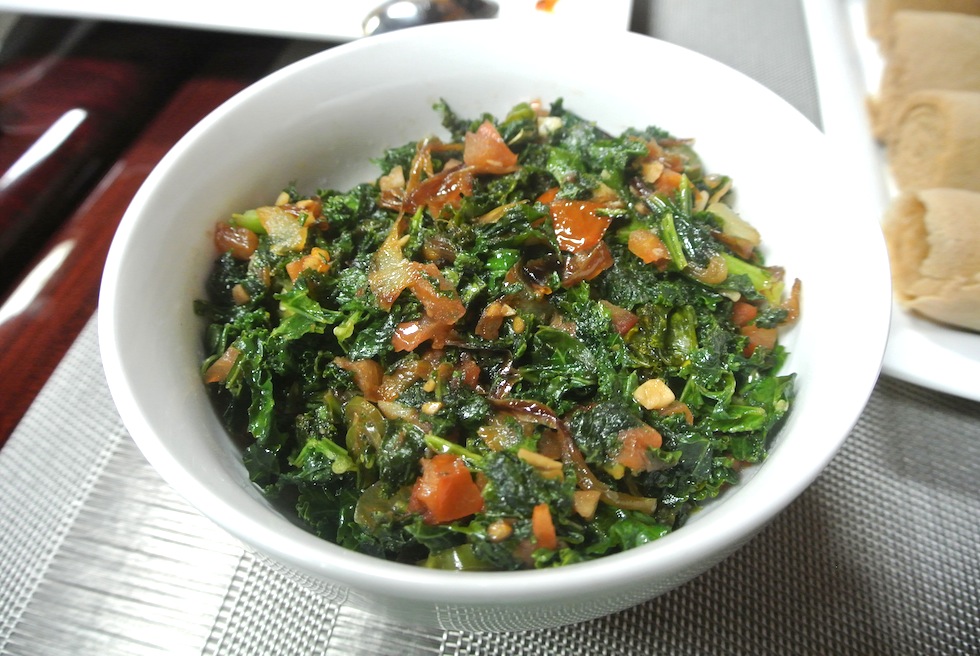 A simple preparation of kale found it sautéed until just wilted and paired with slivers of onion and garlic. Nothing extraordinary, but it provided some much needed balance with all of the meat-heavy dishes and was finished off quickly, requiring a second order for the table. 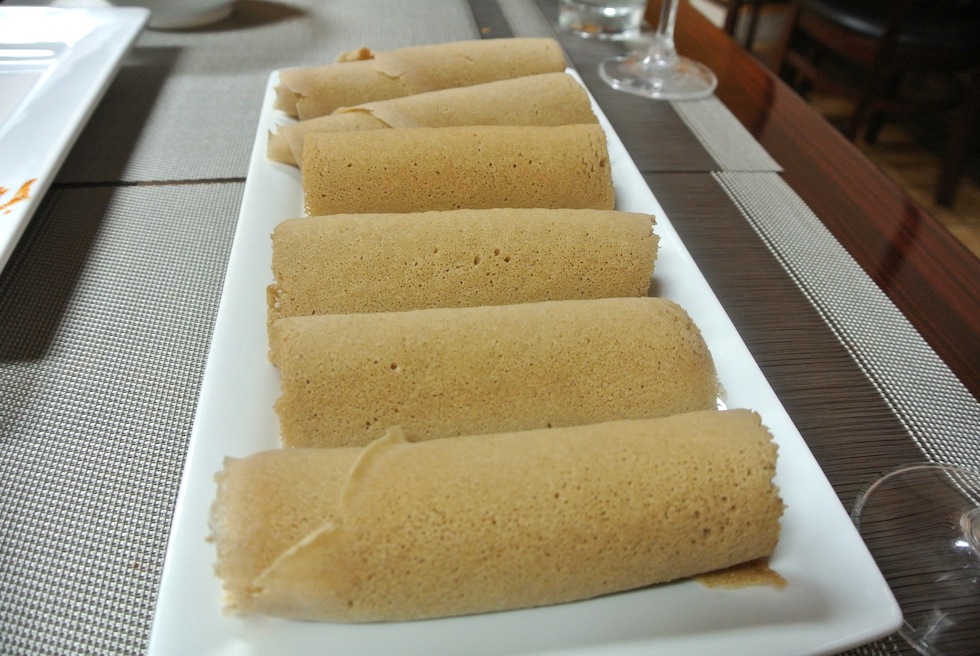 You really can’t have Ethiopian food without some injera on the side (don’t you dare ask for a fork), and right on cue several tightly rolled spools were placed on the table. Not only does the sponginess of the bread help to absorb a lot of the saucy/stewed dishes, but it’s slight sourness really helps to cut through some of the more intense spices and herbs used in so much of the cooking. 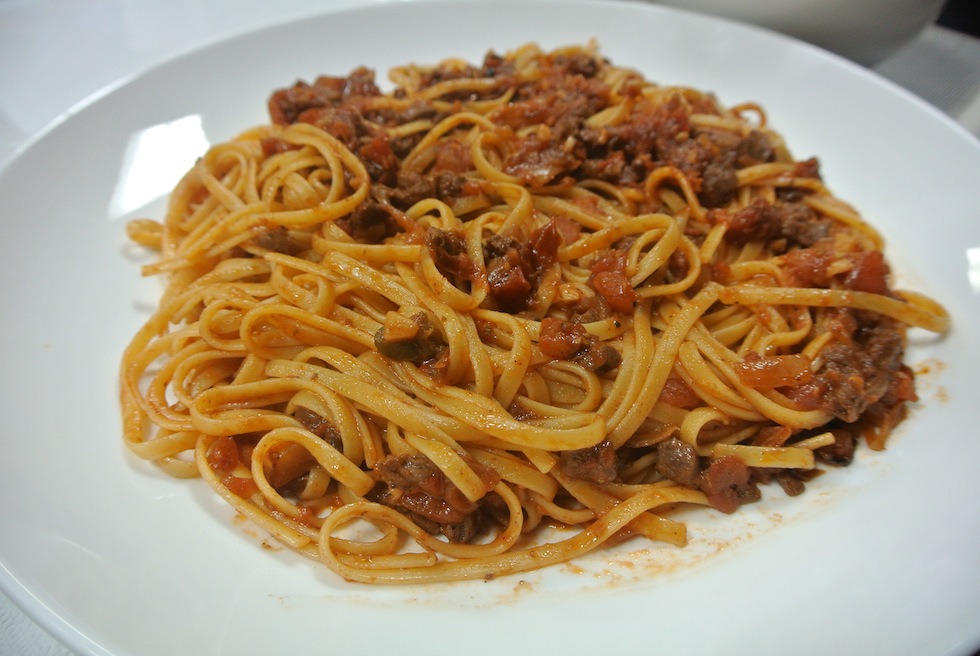 While most of what we ordered fell under the more traditional Ethiopian dishes, we were served a pasta dish that was certainly rooted in Italian cooking. No, the linguine wasn’t homemade, but it sure was cooked to a perfect al dente, a credit to Afifi’s understanding of Italian food. The noodles were tossed in a light tomato sauce, just barely staining the plate, with morsels of filet mignon; so simple, yet satisfying in the same way as a bowl of Grandma’s spaghetti and meatballs at a Sunday night dinner. 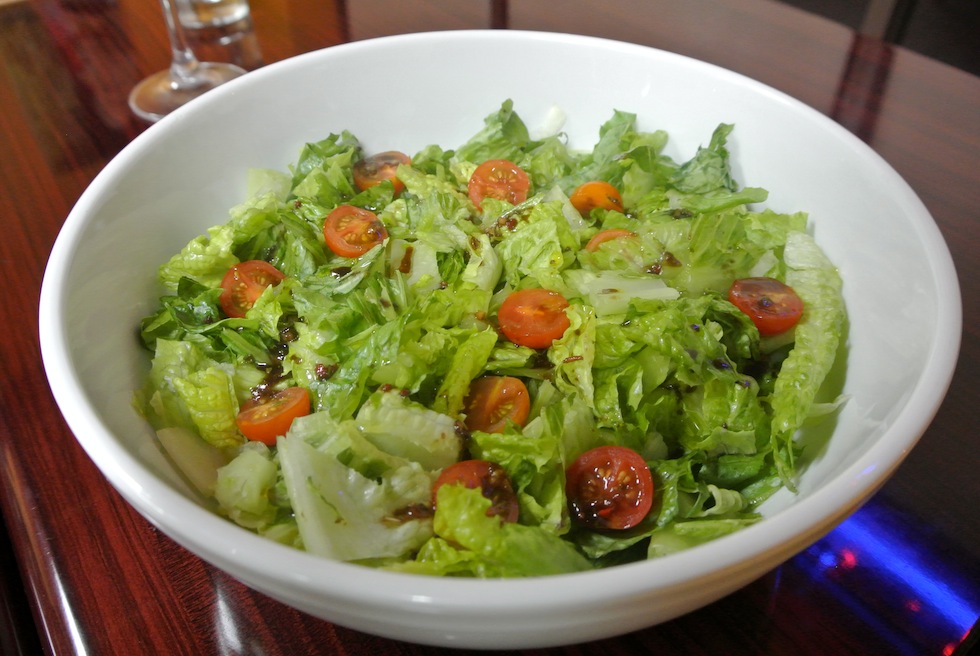 A sort of side salad was brought out featuring crisp greens and ripe cherry tomatoes dressed with a bit of a balsamic vinaigrette. Nothing remarkable in terms of flavor, but it served its purpose in breaking up all of the meat-intense courses and clearing the palate of all the accumulated spices. 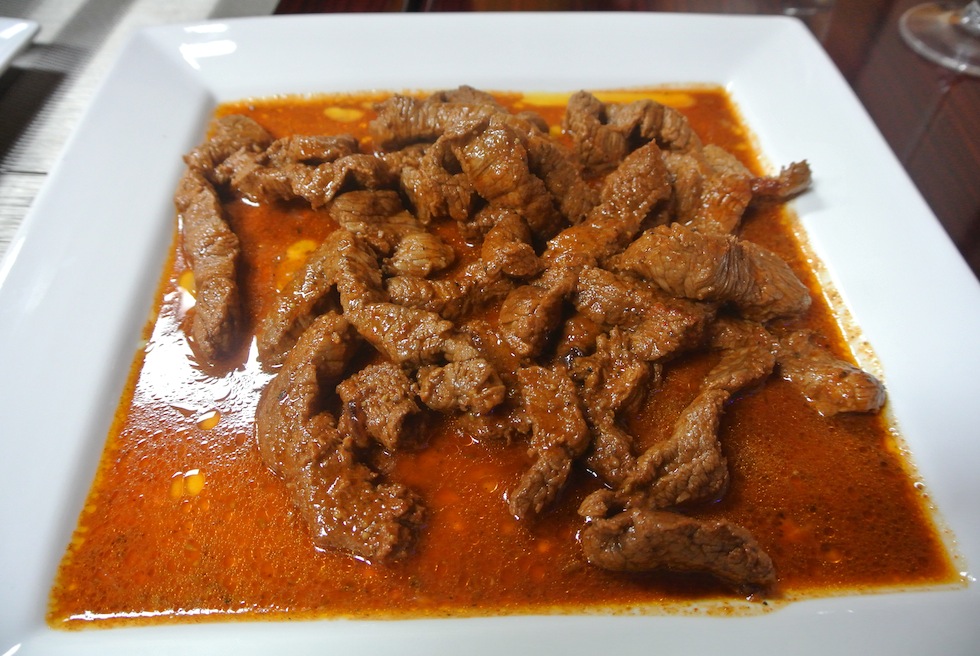 Unfortunately, the Zil Zil was the only dish of the night that fell flat. The meat itself was rather chewy and the sauce lacked the same intense kick of flavorful spice as other dishes. It probably didn’t help either that the other meat dishes were so on point that this one just paled in comparison. 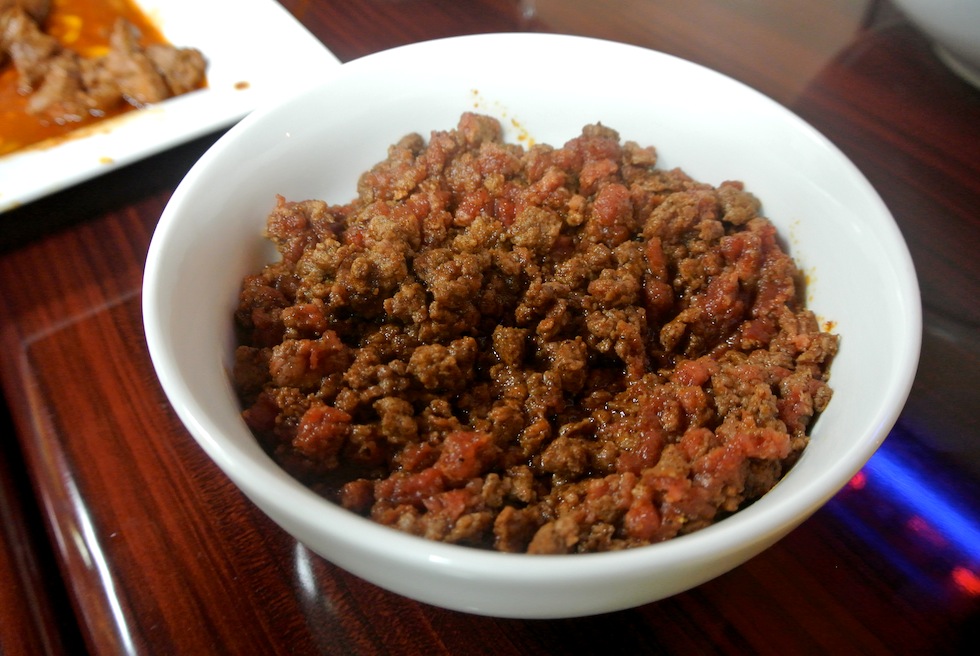 Last to arrive was a bowl of kitfo, minced raw beef liberally seasoned with a blend of chile powder and other spices.  The level of spiciness here reached beyond my lips and mouth and took hold deep in my stomach, a steady and long-lasting heat that I couldn’t get enough of despite knowing full well that I’d pay for it the next day.  The blend of raw and not-so-raw beef was incredibly soft with an almost melt-in-your-mouth butteriness that made it difficult to stop eating (I took home the leftovers and ate them for breakfast the following morning).

Even though Asli Cuisine marks the first foray into the restaurant world for Fuad Afifi, he seems to be doing everything right so far. It starts with his personality, eager to please and embracing as if you were a family member home for the holidays, something that’s not so easy to find these days unless you’re already a regular. His restaurant is clean on all fronts, with a kitchen so spotless that at first glance you wonder if any cooking actually happens there. Then there’s the food, as authentic as you’ll find in the city, fresh and vibrant with the Mediterranean influences elevating the food beyond your average Ethiopian fare. Whether a first-timer or an experienced vet when it comes to Ethiopian food, a meal at Asli Cuisine is guaranteed to nourish both the stomach and the soul, a credit to the vision and hard work of the man in charge.