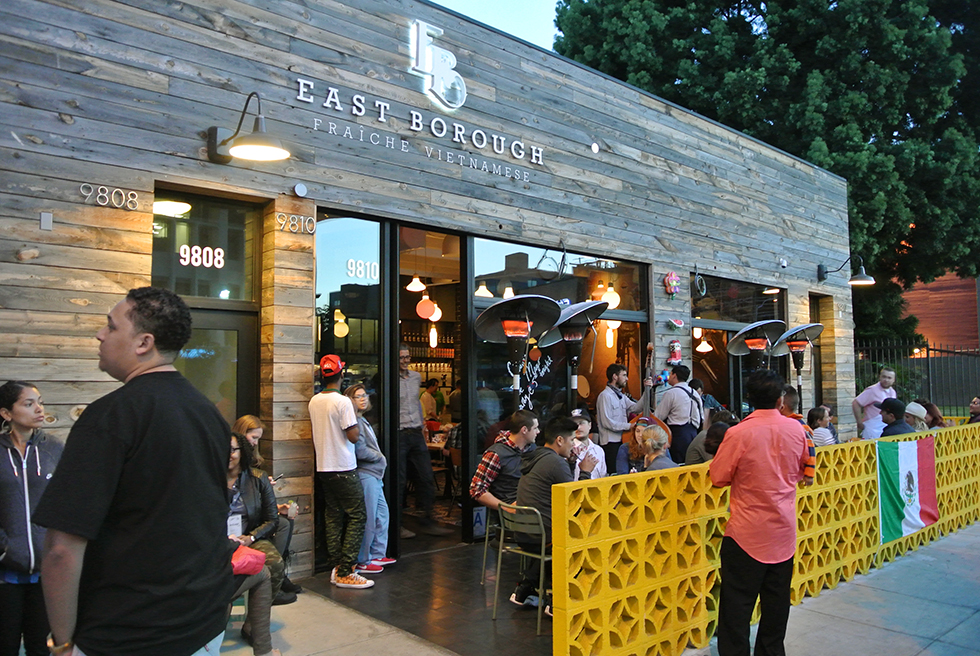 What do you get when you cross one of the city’s best fried chicken purveyors with a Vietnamese restaurant on a Mexican-American holiday? Chino de Mayo, of course. The collaboration between Free Range LA, East Borough and The HundredsXTapatio was in full effect Monday night with a constant wait for tables and a packed bar area of hungry cool guys and girls eager to indulge in the evening’s special menu.

I’ve known Chef Jesse Furman of Free Range for some time now and his top notch fried chicken is finally beginning to reach an audience beyond the regular Sunday farmer’s market crowd. He teamed up with Chef/Co-owner Chloe Tran of East Borough to create a menu blending Mexican classics (tortas, nachos, tacos…you get the idea) with Vietnamese flavors. As far apart as the two countries are geographically, their cuisines actually have a lot more in common than you might think, needing to look no further than the heavy-handed use of cilantro and chilies. In addition to all the of the comida, there was also a handful of drink pairings to cut through some of the heat and keep things lively. 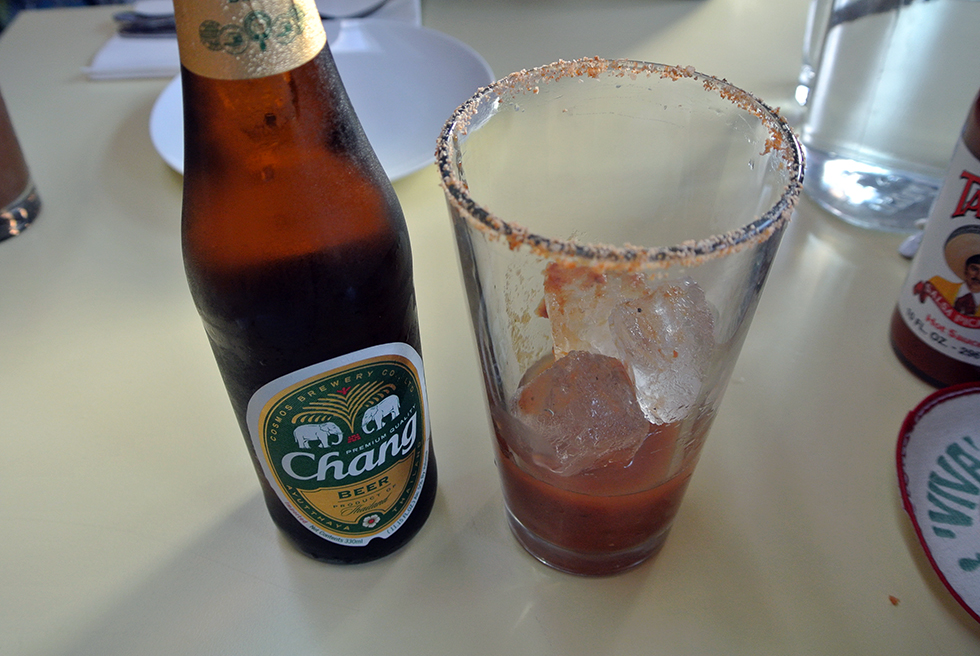 No corona’s tonight as Michelada’s were made with Chang, a Thai beer. Once it was poured and mixed with the house tomato sauce though, the beer’s country of origin was hardly noticeable. Salty and a bit spicy, but all around refreshing. 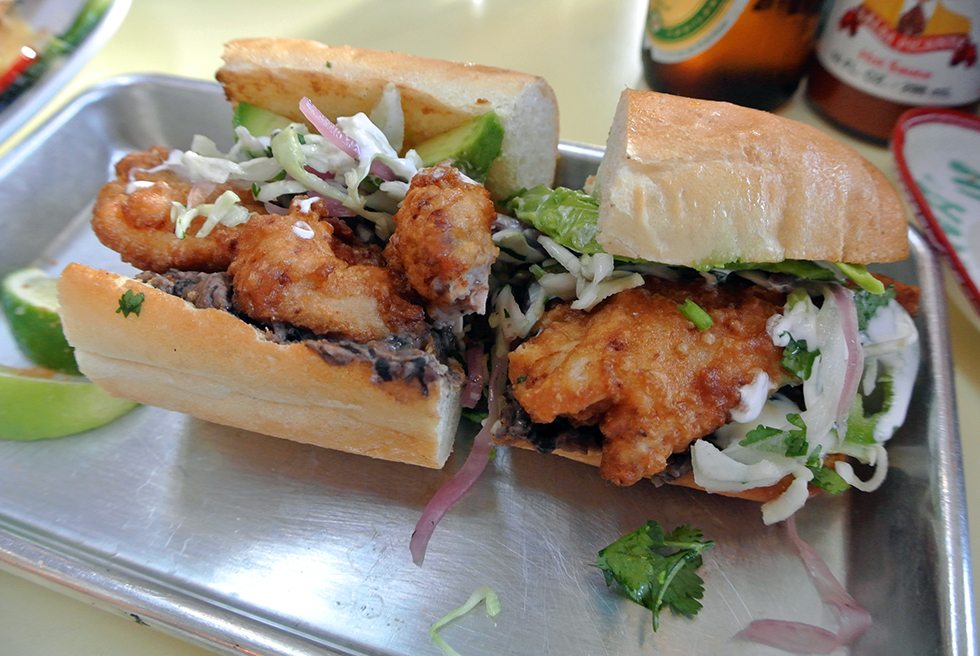 First up was the fried chicken torta, recalling the classic Mexican sandwich with a layer of refried beans, avocado slices and sour cream. The cole slaw, with its Asian vinegar-pickled onions, jalapenos and cilantro, was certainly banh mi-esque; if only it was served on a baguette (though the softer roll used worked quite well here). Oh yeah, the tempura fried chicken? Excellent as always with a crispy, well seasoned crust and a juicy interior that stood up to all the other ingredients at play here. 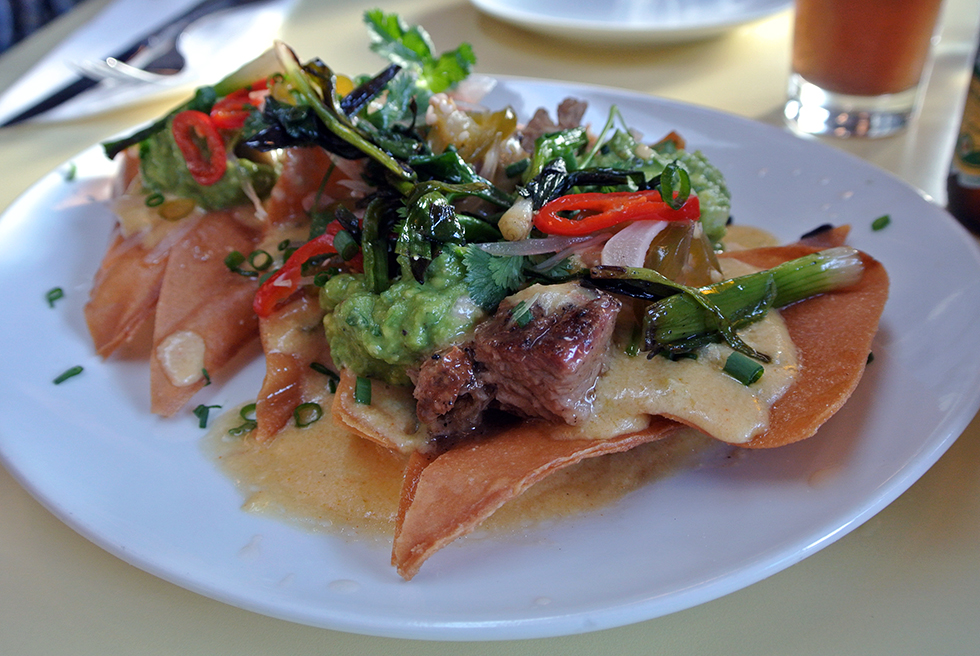 Nachos were exceptional with huge, juicy chunks of grilled pork and fried wontons in place of tortilla chips. The runny Tapatio-infused cheese sauce was a nice upgrade over the gunky canned stuff (still love it though!), while the charred greens and scoops of guac helped keep things light and fresh. 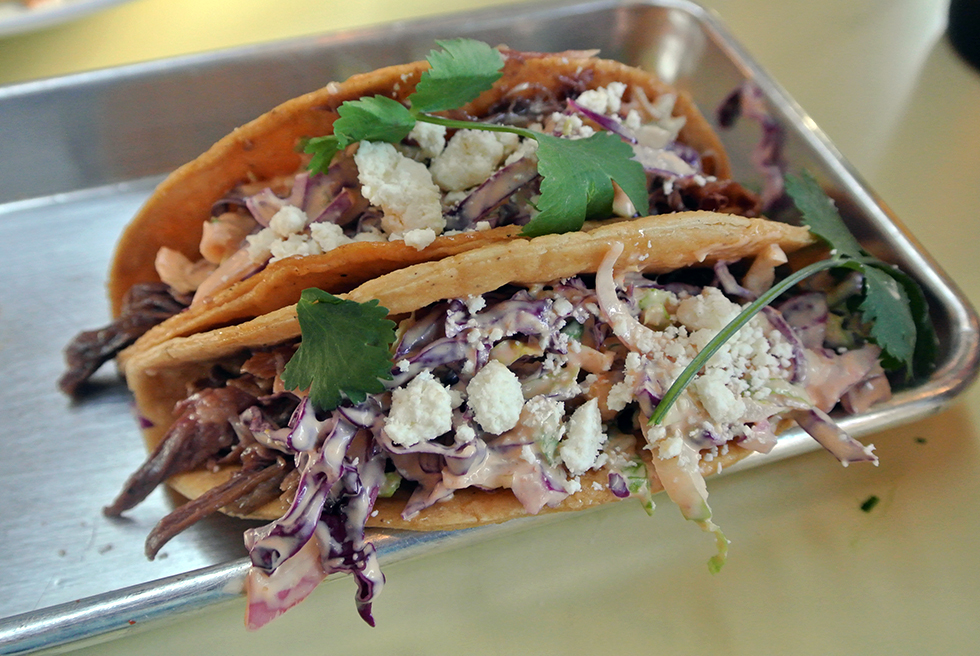 I was torn between these and the fish tacos, but the pho braised oxtail (this being a Vietnamese restaurant and all) was the deciding factor. The pho “essence” was there all right, with the shredded oxtail reminding me of machaca. Despite the crunchy shatter of the hard shell taco, it held up to all of the ingredients stuffed inside ensuring that each bite captured every element. I thought the slaw could’ve been spicier – good thing every table had a full bottle of Tapatio for maximum dousing. 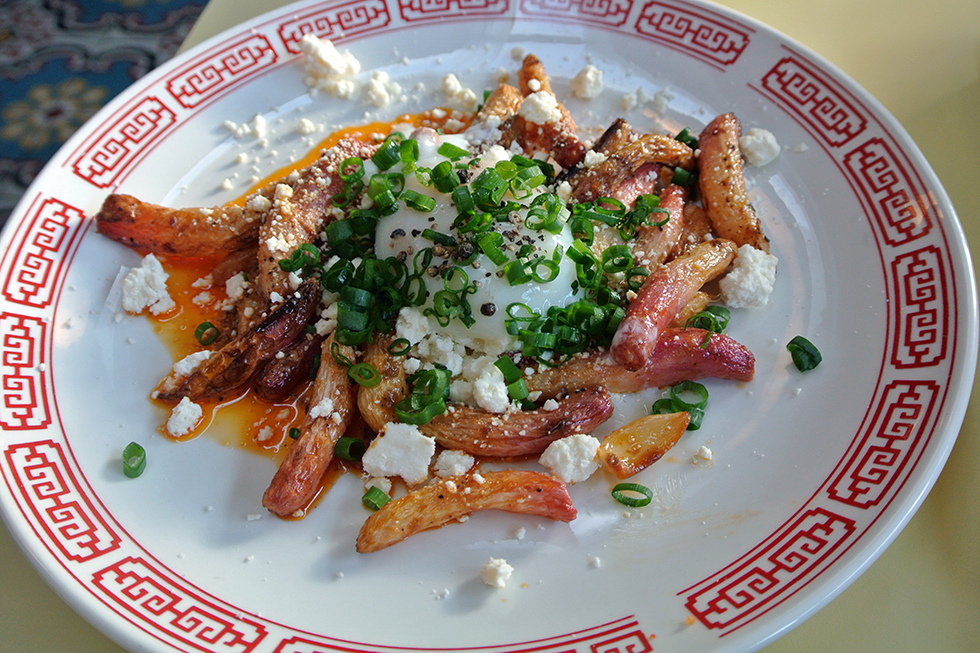 These crispy little radishes were perhaps the best bite of the night transforming the lowly root vegetable, usually relegated to the sidelines at your local taco truck, into a substantial player. The crab butter packed a serious punch of flavor that took control of the dish (in the best possible way, of course), while the poached egg reaffirmed my belief that an egg on top of anything is always better. 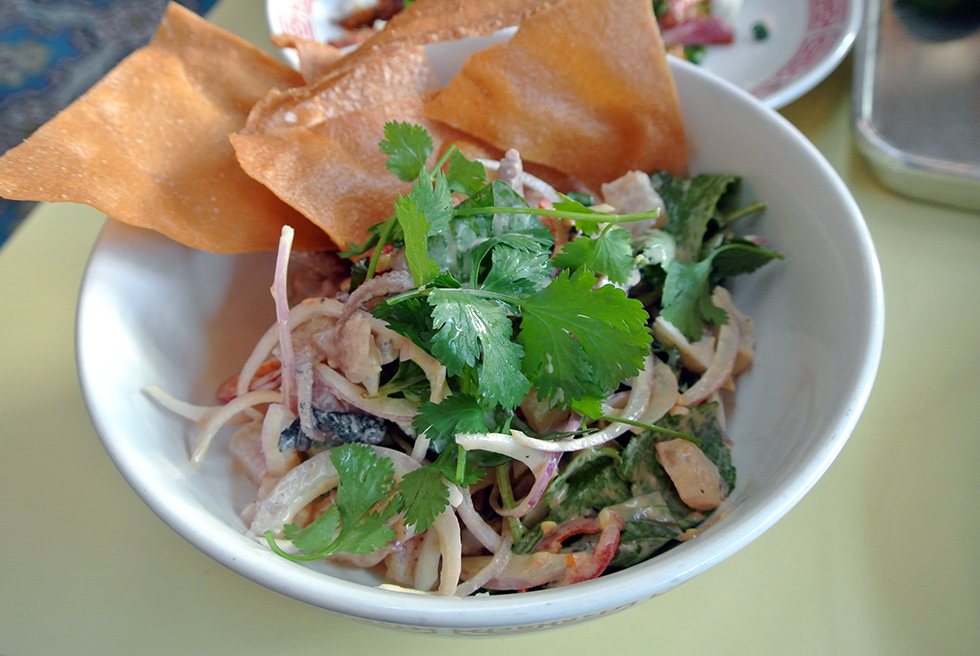 Always in the mood for a good ceviche, I couldn’t help but find this dish to be a bit disappointing. It had all the right elements going for it but just lacked that bright pop of flavors. The contrasting knife cuts (cubed fish and slivered onions) made it difficult to get a “complete” bite, while the cilantro sprigs got in the way of some mouthfuls and were non-existent in others. The one plus was the tender octopus, which I made a point to locate every last one of before declaring the bowl finished. 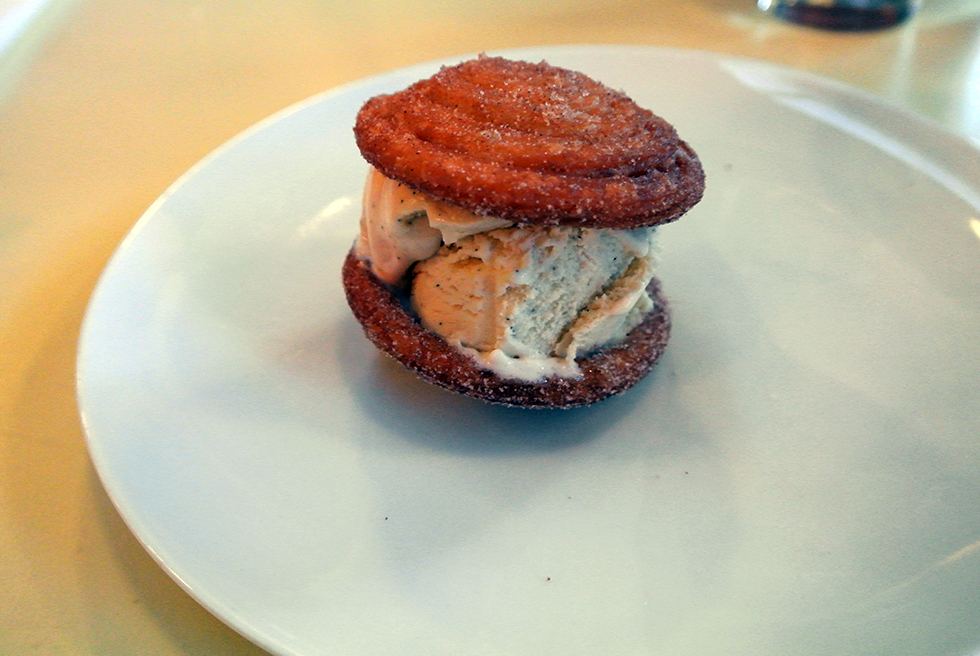 I have no idea why it took this long for someone to dream up an ice cream sandwich with churros as bookends, but I’m sure as hell glad that it now exists. Churro Borough is a dessert company that does pop-ups and other catering events, and as simple as their creation may be it was executed to perfection Monday night, the perfectly sweet, cinnamon-y finish to a fun meal.

All in all it was an enjoyable evening for all parties involved with great food and happy customers. The best part about these collaborative dinners is how they bring together different cross-sections of the city, like Free Range’s strong streetwear following equipped with plenty of retro Jordans and camo wear, alongside the cool-in-their-own-right westside crowd that seemed quite at ease munching on tacos outdoors to the tune of mariachis. Cinco de Mayo proved to be a great reason to join together fried chicken and Vietnamese food, but I’m hoping it won’t take a full year to get Chefs Furman and Tran back in the kitchen together. If you haven’t dined at East Borough on a regular night yet, make it a point to go for what I would call authentically inventive Vietnamese food.