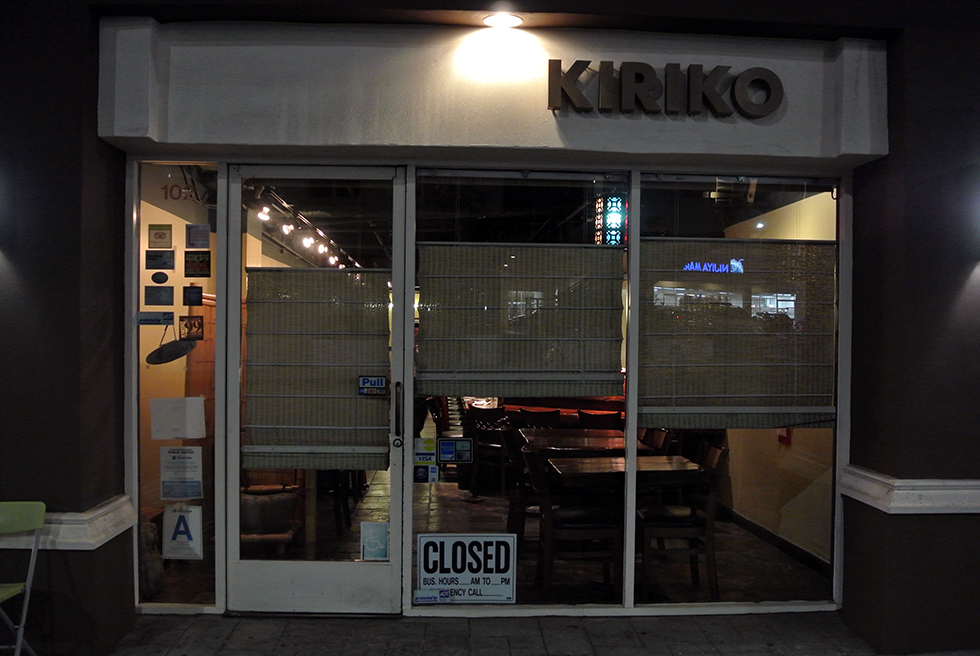 It had been a few years since I last attended a college lecture, but last Wednesday I found myself in UCLA’s Schoenberg Hall for The Science of Sushi, the first in a series of three lectures part of the UCLA Science and Food Public Lecture Series. Dr. Ole Mouritsen delivered an informative history of sushi back to its earliest days, schooled the audience on the idea of umami, and even explained the difference in flesh color between tuna, halibut and salmon (long explanation short, it has to with myoglobin concentrations being higher in slower, long distance swimmers like tuna compared to the rapid bursts of a halibut). He was joined onstage by Chef Morihiro Onodera, formerly of Mori Sushi in West LA (he sold it in 2011) who has since focused his expertise to crafting handmade dishware and developing the perfect rice via a partnership with rice farmer Ichiro Tamaki of Tamaki Farms. Needless to say, after two hours of straight sushi talk there was only only one thing I wanted to eat – sushi.

Given that I was in Westwood at 9pm I figured my best bet was to hop on the freeway quickly and head over to Kiriko on Sawtelle. Despite locking up at 10, I was assured that my close-to-closing arrival wouldn’t be an inconvenience to the chefs behind the bar. I was seated in front of Chef Shinji and watched him finish plating a tiny mound of uni alongside rarely seen mantis shrimp. After giving his station a wipe and resetting his supplies, I requested omakase. I also made sure to order a round of beer for the chefs to show my appreciation for their serving me so late. 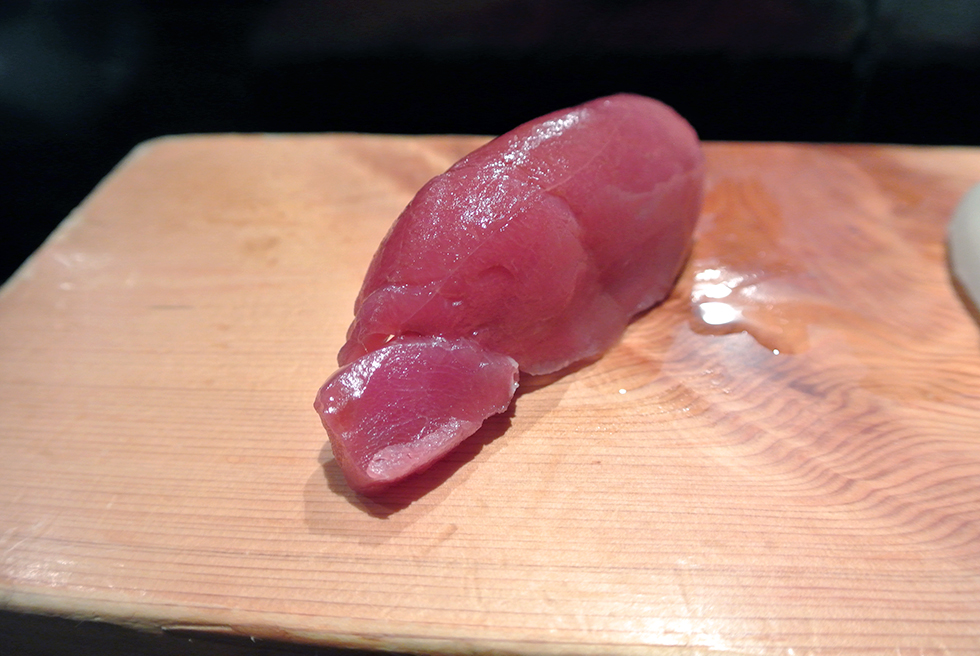 First to arrive was Bluefin tuna, soft as can be and conveying the pure essence of the fish. Yes, it’s endangered due to overfishing, and yes, I need to make a serious effort to minimize my personal consumption, but in this particular moment I feigned ignorance and enjoyed each bite. 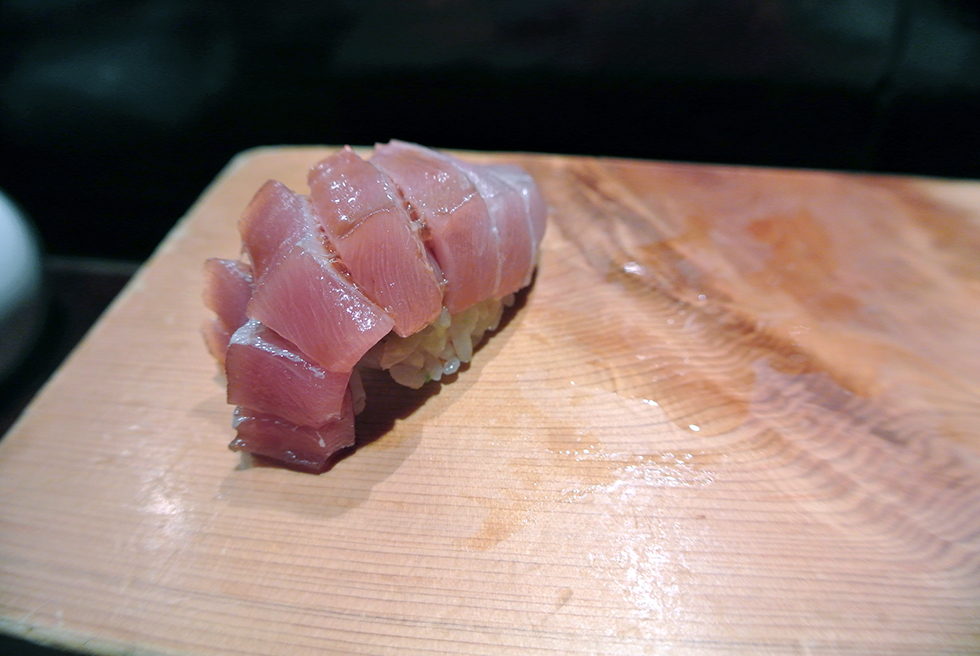 The fattier, lighter colored chutoro came next and displayed a similar flavor to the regular tuna, but with a more pronounced oiliness that required patience in order to capture the complete effect as it melted into edible bliss. 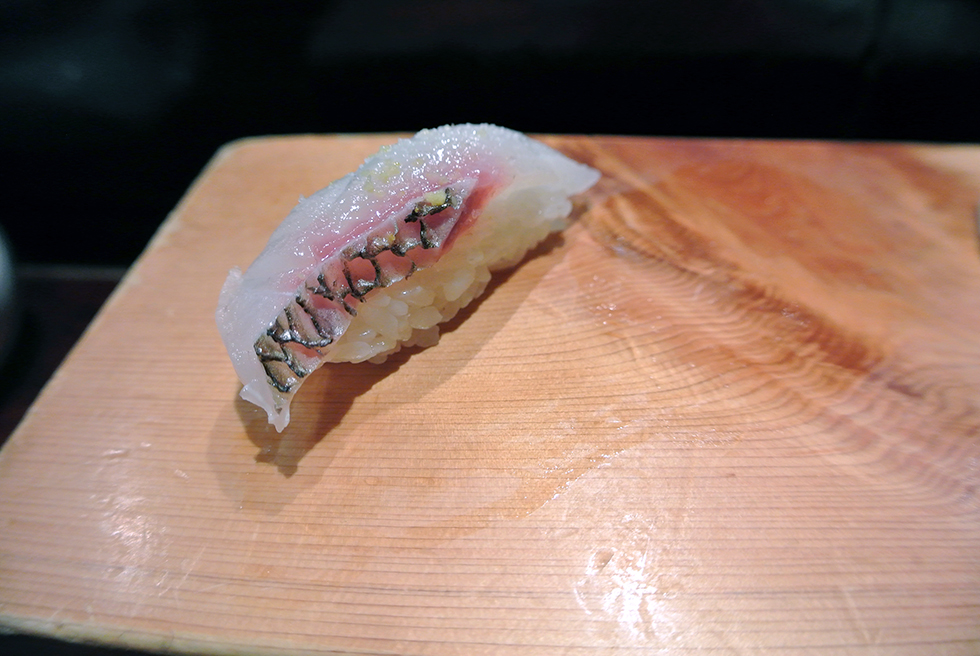 The translucent, pink-hued flesh of wild red snapper delivered a pleasing bite with a slight chew, while a bit of sea salt enlivened the tai’s inherent flavor. 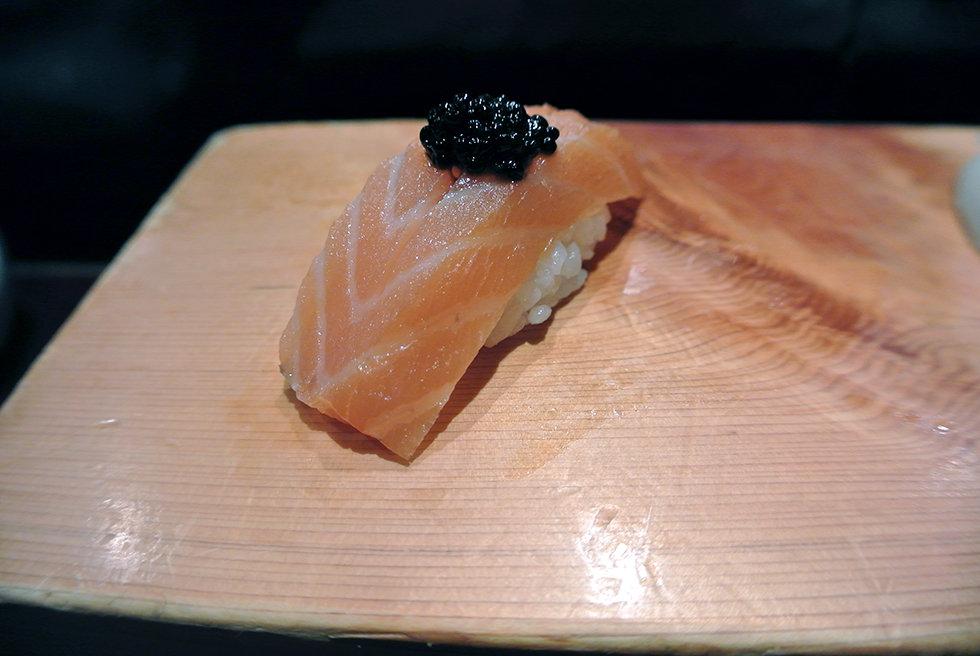 Salmon sushi can be a bit boring, but the smoky elements at play here really pleased the palate. The dollop of caviar was a welcome addition, lending a subtle popping sensation when eaten. 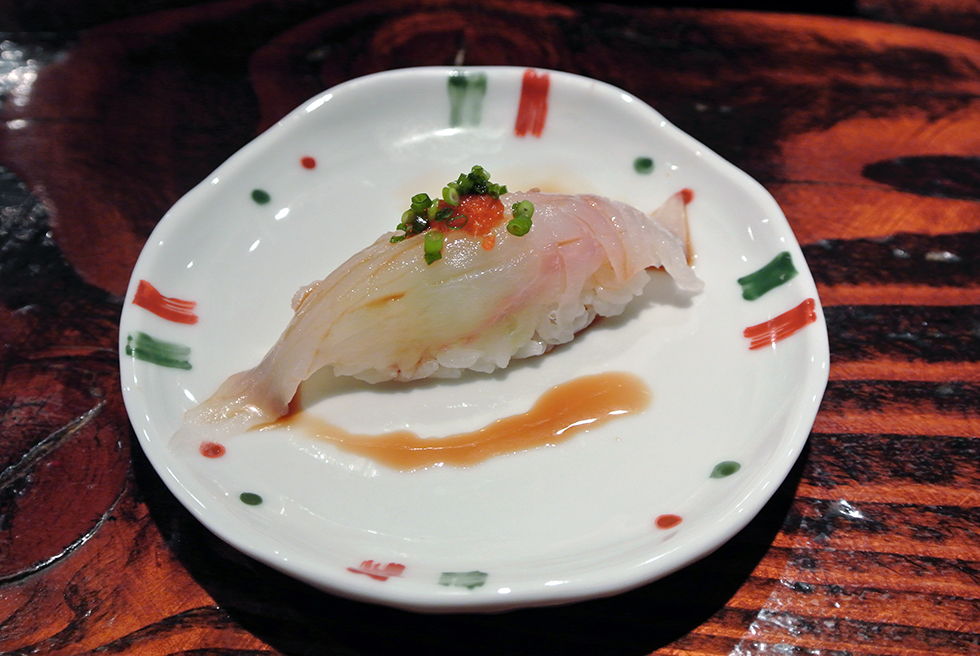 Mild-tasting hirame was perfectly paired with a tangy ponzu sauce and combination of scallion and grated daikon. 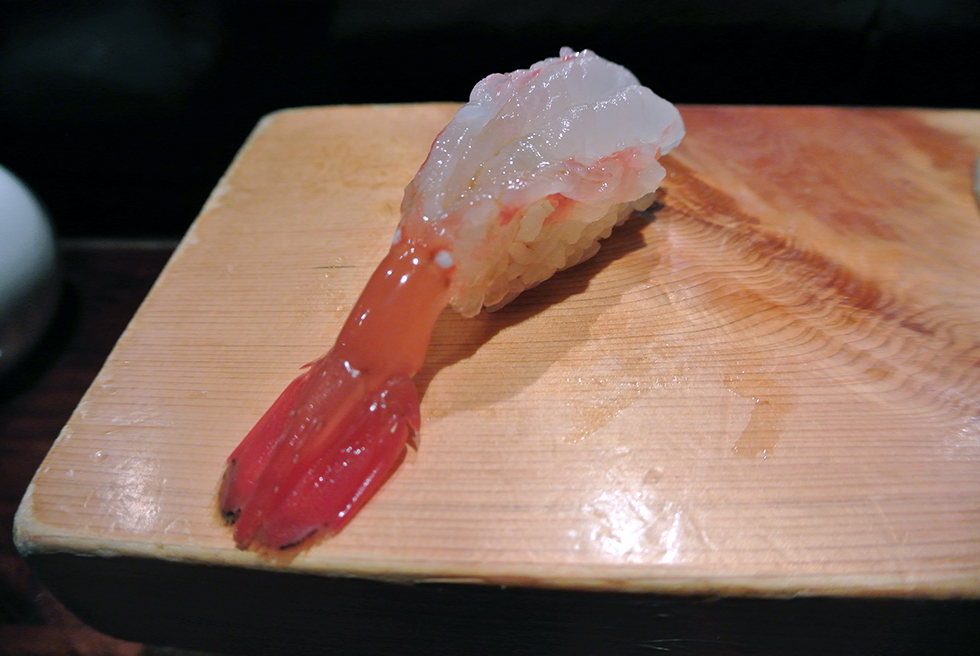 Shinji-san deftly dismembered the previously live amaebi and quickly served it to ensure maximum freshness. The result was as sweet as its name; snappy with a cool, creamy finish. 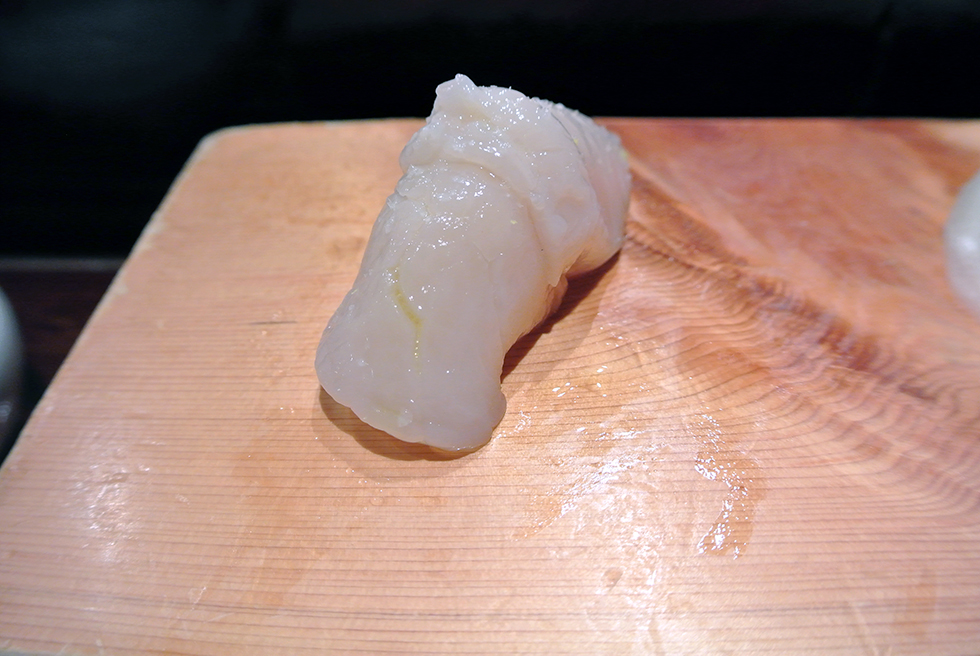 Hotate was especially sweet and typically soft with lemon and sea salt in place of soy sauce. 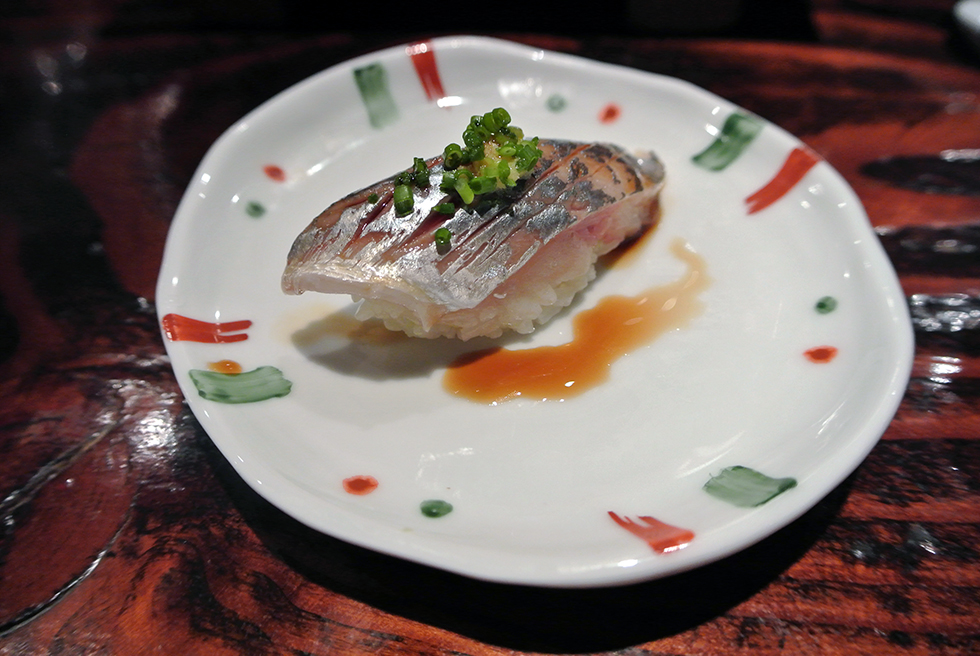 A beautiful slice of silver-striped aji brought forth a good bit of fishiness that was countered by the trifecta of ponzu, scallion and grated ginger. An outstanding example of spanish mackerel all around. 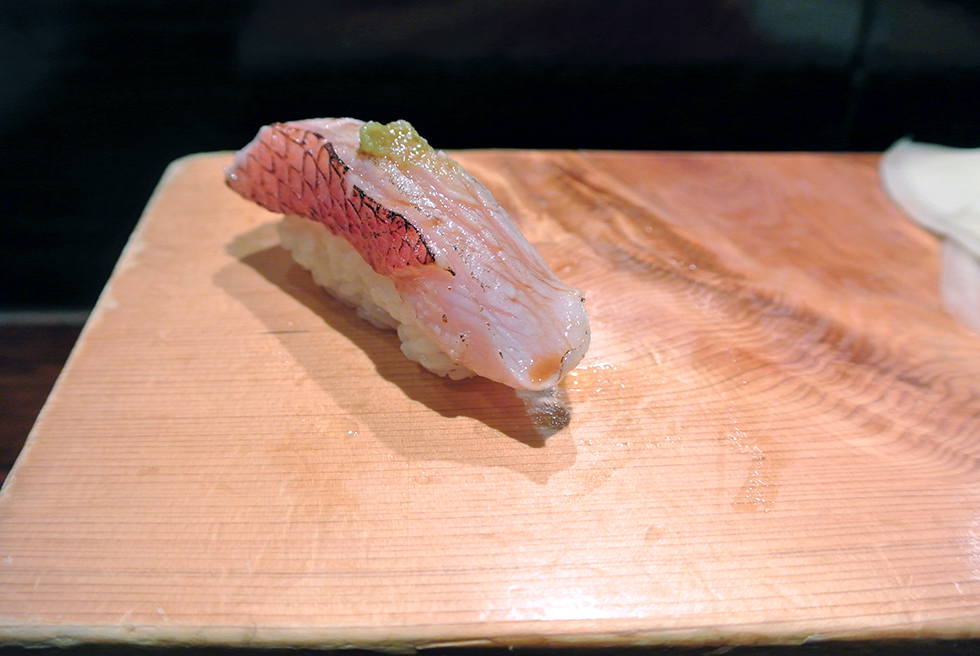 Seared kinmedai was one of the evening’s highlights. A quick torching added a smoky quality to the tender, barely warmed flesh. A dab of yuzukosho provided some lingering heat on the finish. 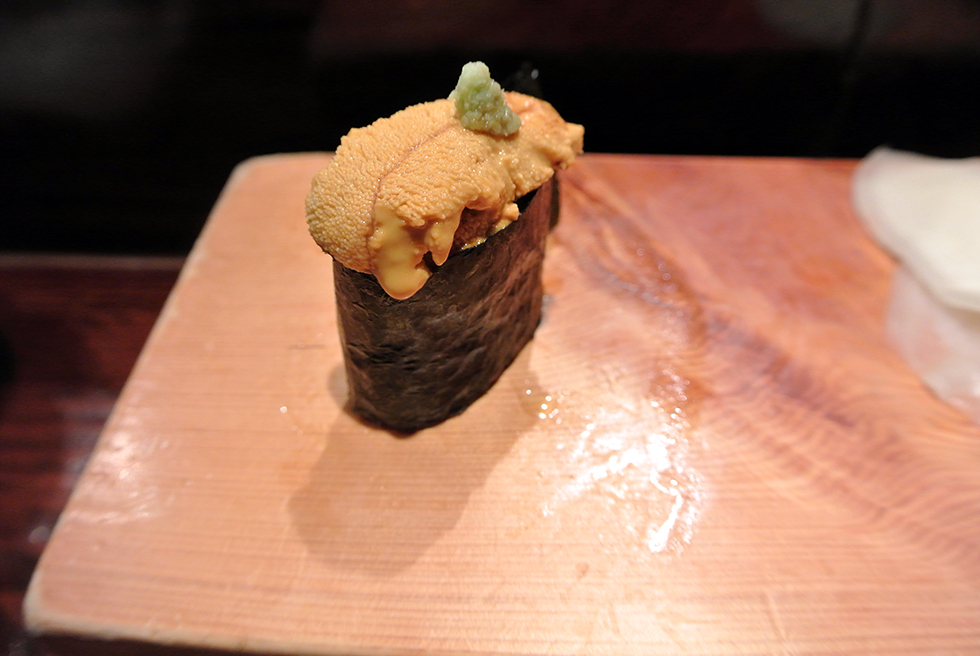 San Diego uni was uber-creamy and best left to slowly melt on the tongue rather than chew, ensuring total enjoyment of its sweet, oceanic qualities. 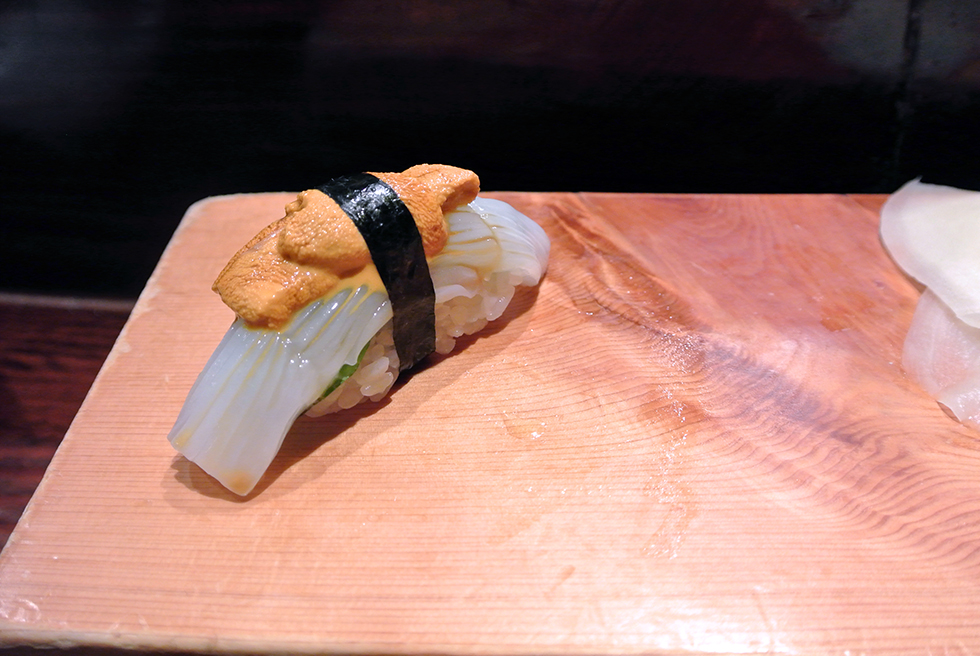 Perhaps overhearing my praise for the sea urchin, Shinji-san utilized the orange lobes again, but this time as a backpack for a slippery section of squid. The key, though, was the use of shiso to balance the intense lush factors at play. 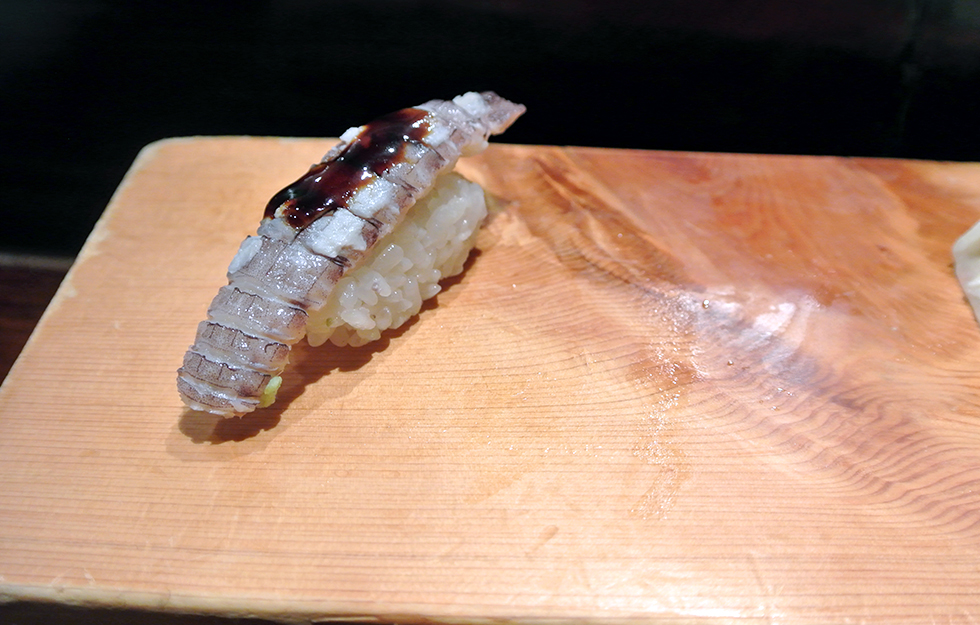 I’ve only ever eaten, or for that matter seen, mantis shrimp once prior to this, and that was many years ago at Hirozen Gourmet (if I recall they referred to is as “black shrimp”). It’s shape was similar to the meat you might pull out of a crab leg, and texture-wise it was somewhere between crab and shrimp. The drizzle of eel sauce actually paired quite well with the otherwise clean, refined flavor of the shako. 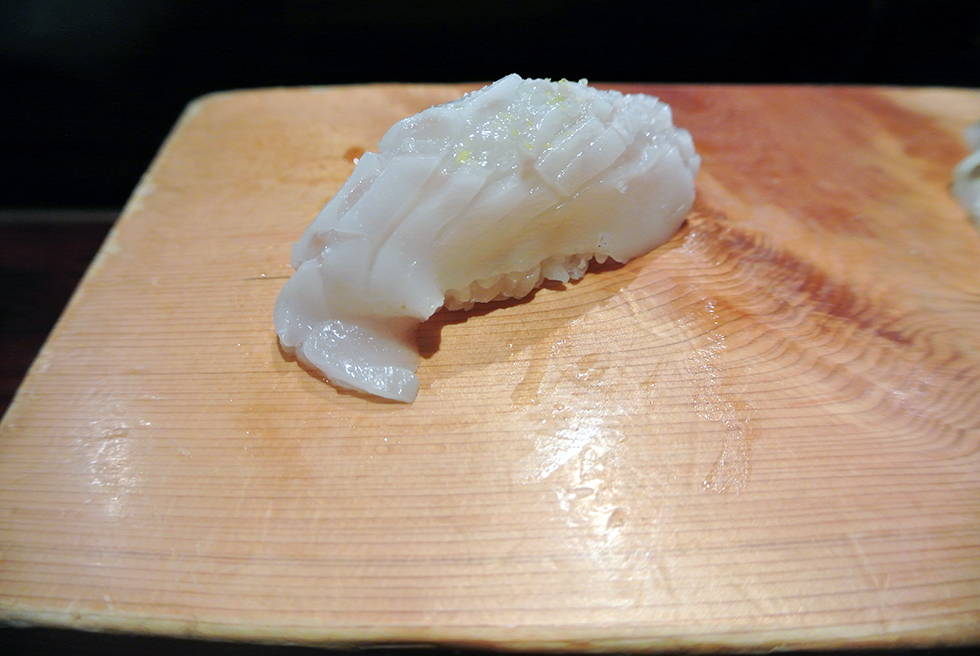 Halibut fin was all texture – slightly crunchy, giving way to a chewy bit of fat – and was aided by a liberal application of lemon and sea salt. 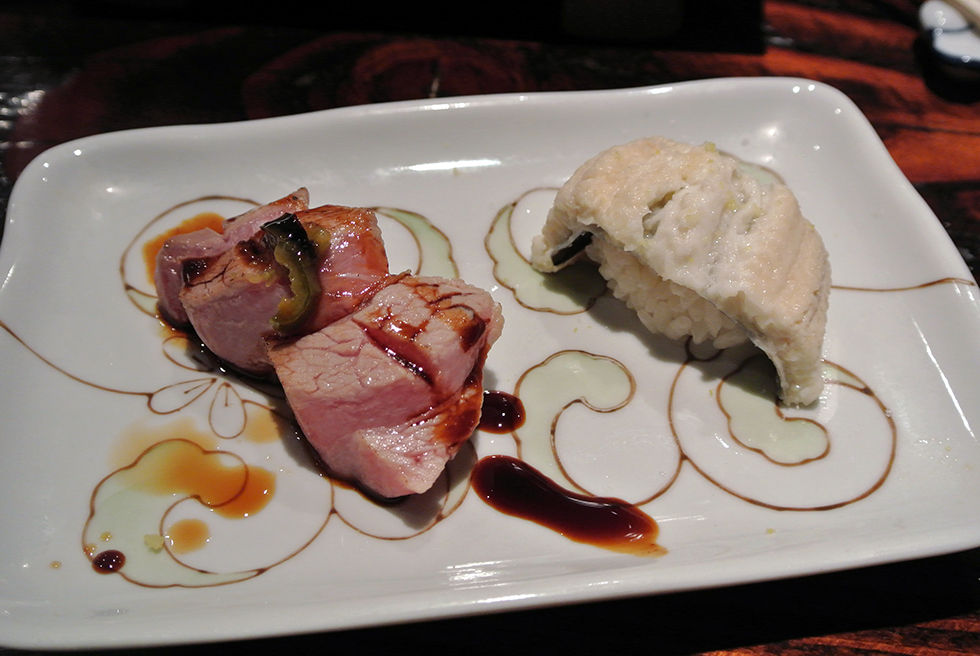 Closing out the meal was a last plate featuring two pieces of cooked sushi. On the left was seared otoro with yuzukosho, pickled jalapeno, ponzu and eel sauce. The eel sauce initially threw me off, but the fatty tuna was so over-the-top rich and decadent that the sweetness actually helped bring everything together, especially with the spice from the yuzukosho and jalapeno.

And finally, on the right we had sea eel, warm and perfectly light with only a touch of sea salt and acidity on the finish.

After listening to the lyrical stylings of two genuine sushi experts for the better part of an evening, my meal at Kiriko certainly didn’t disappoint. Once you learn the science behind tuna’s red color, or that the rice used in sushi can play a more pivotal role in sushi than the fish, you can’t just go anywhere that serves raw seafood over rice and expect to be wholly satisfied. The omakase covered most of my favorites with standouts like kinmedai, smoked salmon and amaebi, but also surprised me with the mantis shrimp and pairings like the uni and squid and the seared otoro at the end. There is a clear respect for ingredients and tradition, but also creative flavor interpretations not always seen at more “serious” sushi bars. The small plates menu looked promising and is probably worth a visit all its own for that very reason.