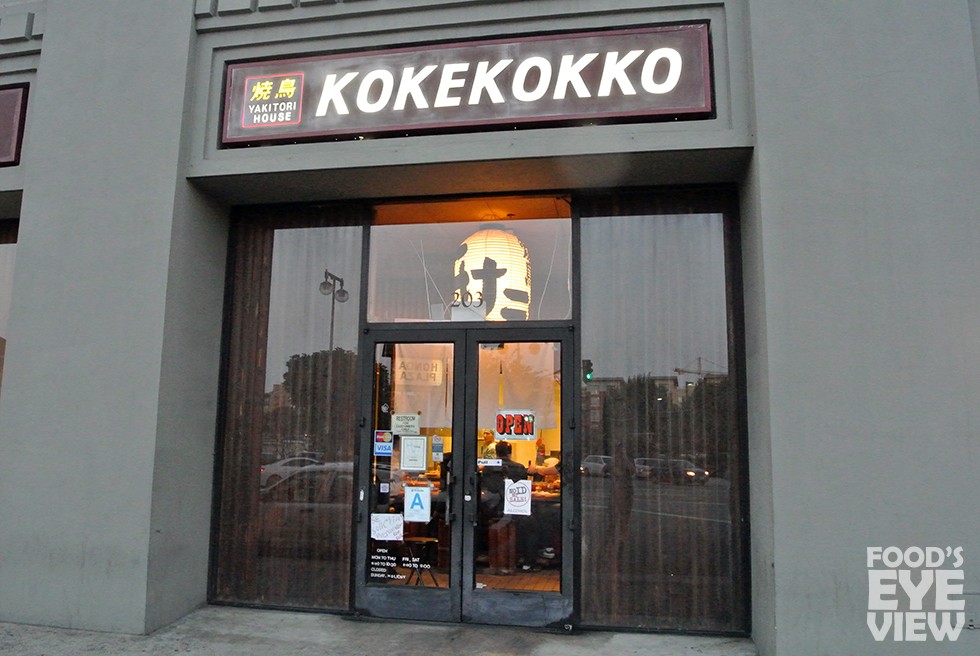 If you let Yelp tell it, the only people who enjoy Kokekokko are regulars. How can you spot a regular? To start, they’re served on special black plates that are purported to be from Japan and often have the customer’s name engraved on them. Next, these VIPs have access to a “secret” menu with items that are unavailable to first-timers and those yet to leave a lasting impression. Oh, you can try to order such items, but after the waitress “checks” with Chef/Owner Tomohiro Sakata you’ll learn that it’s unavailable tonight, only to see it served just a few seats down. Add to all of that remarks about the service being slow and inattentive and it’s a surprise that the restaurant still attracts new customers.

Despite the warnings of a potentially disappointing experience, the allure of skewer after skewer of grilled chicken parts (at least whatever parts I was allowed to order) and my general curiosity were enough to get me in the door. I showed up just after opening and was relieved to find plenty of seats at the wooden bar that surrounds the open grill tended to by Tomo-san and one other cook (another would garnish and serve each skewer throughout the evening). A waitress asked if I had been there before; I lied and said yes, almost instinctually, hoping that they’d mistake me for someone else and roll out the preferential treatment. That wasn’t exactly the case, but I did manage to order a few off-menu items and found the service to be perfectly suitable.

The menu itself is straight to the point: skewers (5-or 10-course sets and a la carte), side orders like gyoza and roast duck, and a handful of rice dishes. After ordering, my (basic) plate was set down in front of me and painted with two condiments: to the left, a Japanese hot mustard called karashi,  and on the right a finely minced paste of ginger and green onion. Additionally, there were two ceramic bowls on the table containing shichimi togarashi (“seven flavor chili pepper”) and sansho (“Japanese pepper”). I wasn’t given any instruction on which to use but found experimenting on my own to be fun. 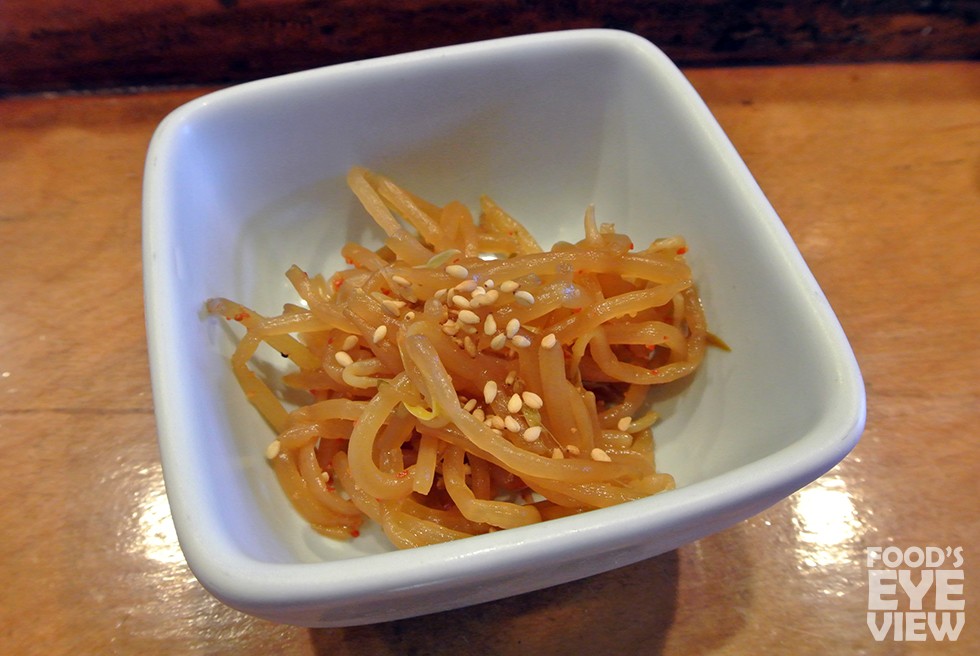 As skewers began to hit the grill a complimentary bite arrived featuring bean sprouts that were sweet (perhaps rice wine vinegar) with the faintest of heat on the finish. I easily could’ve gone for a second serving. 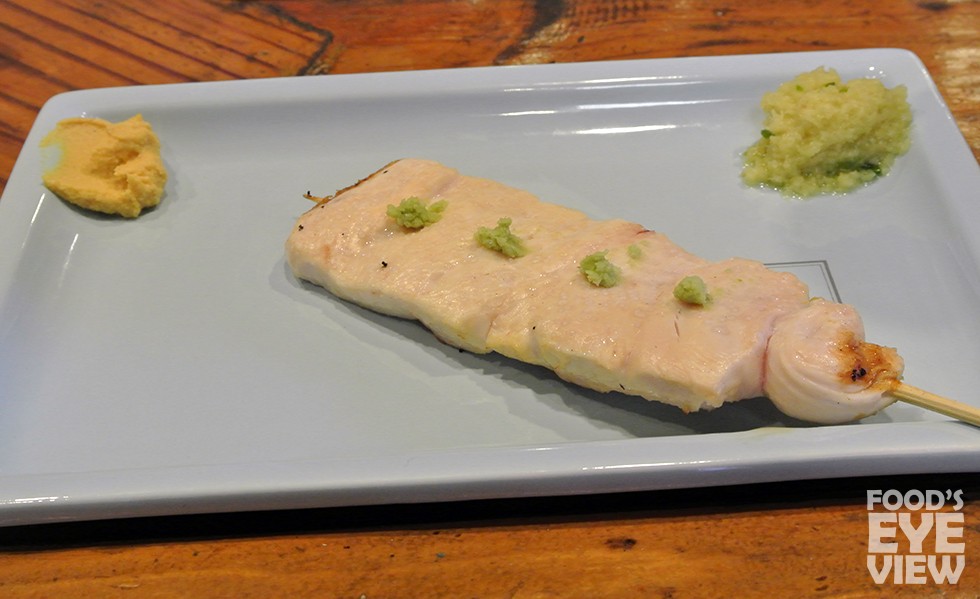 My decision to order the sasami medium-medium rare was the right one as the chicken showed off a springy texture and juicy interior; not at all the dry, overcooked stuff that unfortunately is all too common. Where as a place like Raku wraps their breast meat in skin to ensure that it stays moist, Tomo-san lets the quality of the bird speak for itself by leaving the center a bit raw. 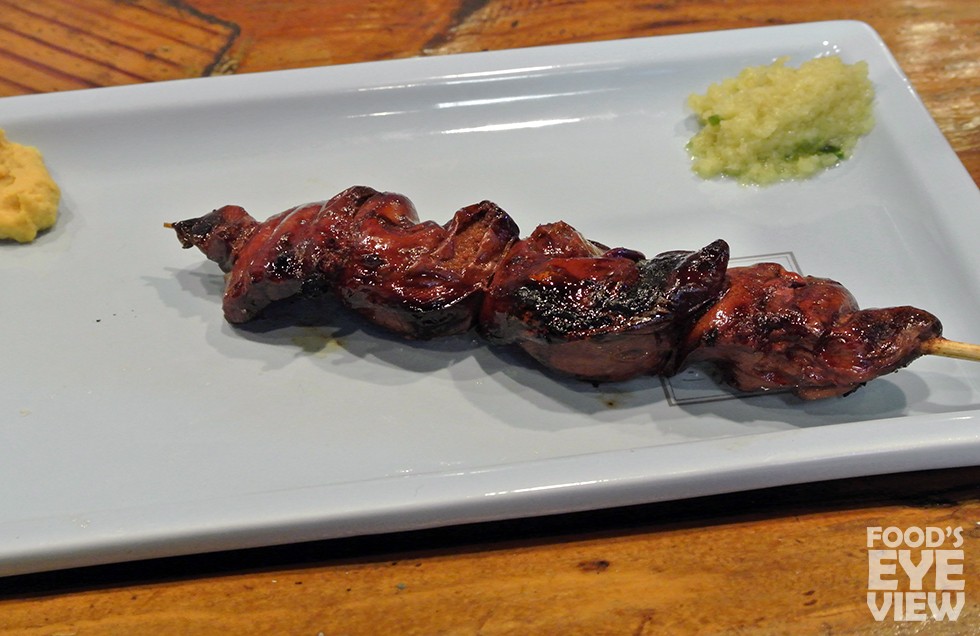 This was liver alright, as the intense taste of iron was apparent right away. The organ was a touch on the dry side and had a certain grittiness while chewing. I enjoyed it most with a dab of the hot mustard. 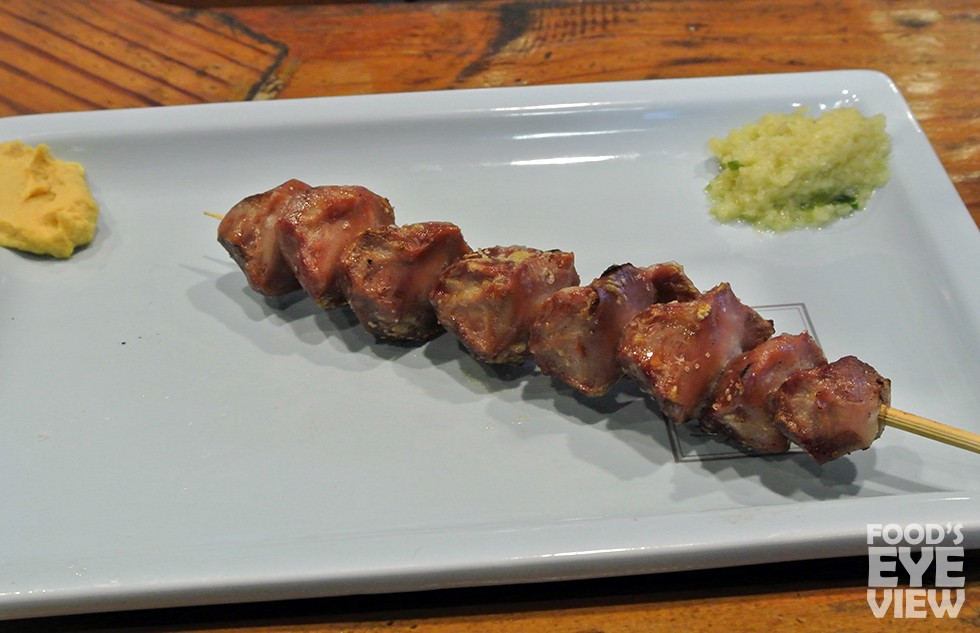 What the gizzards lacked in noticeable flavor they more than made up for with a satisfying crunch and ensuing chewiness. The use of salt accentuated the otherwise mild taste. 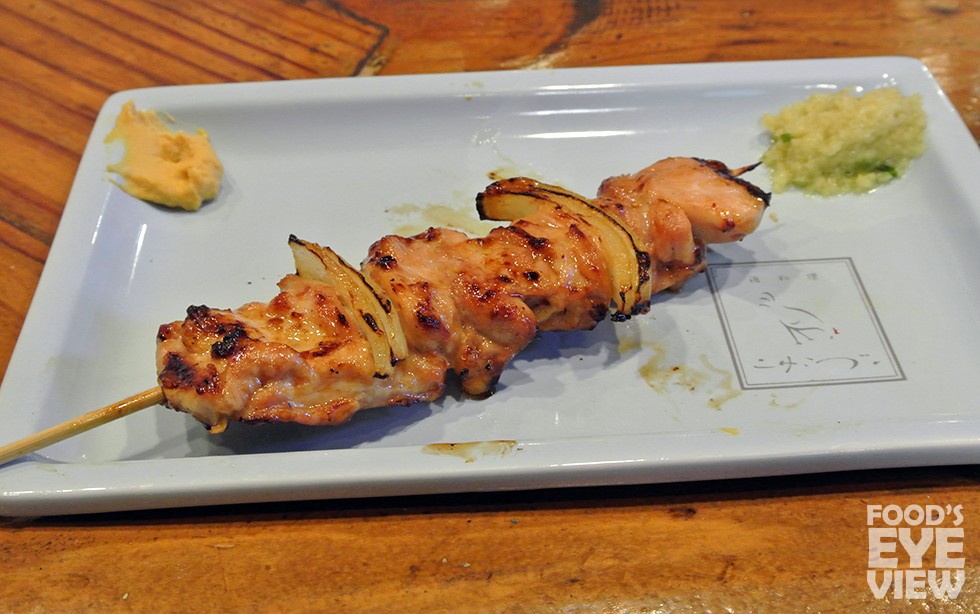 Dark meat from the thigh arrived juicy and unabashedly “chicken-y” (forgive me) and benefitted from the acerbity of the onion layered in between pieces. 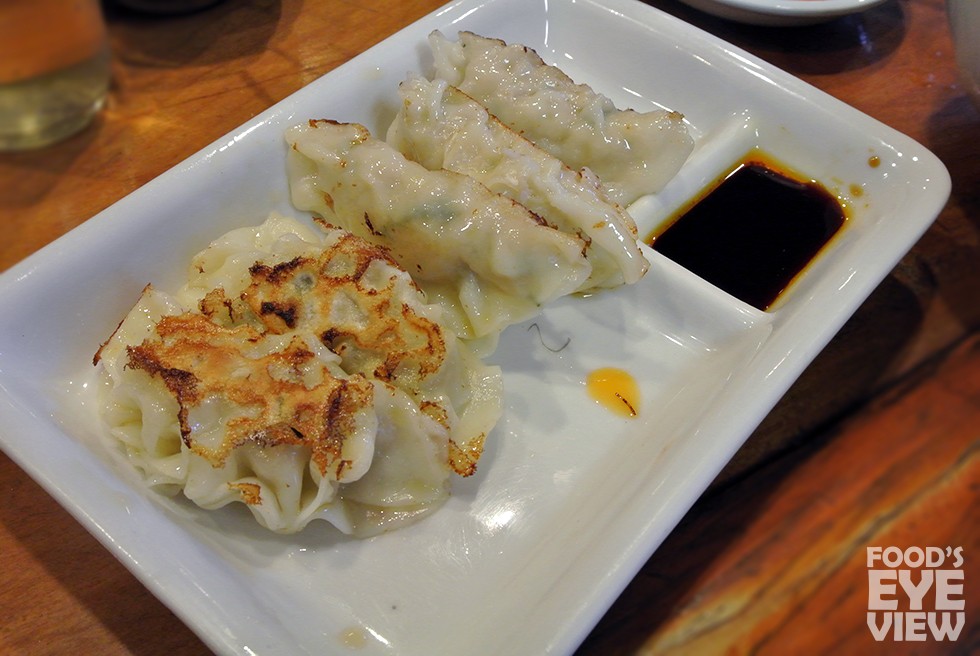 I don’t see chicken gyoza all that often (mostly pork and/or vegetables) but man were these on point. The dumpling skin was nicely crisped on the bottom while still retaining a soft chew on the sides. The ground chicken filling was pure and tasty, requiring little to none of the accompanying sauce. 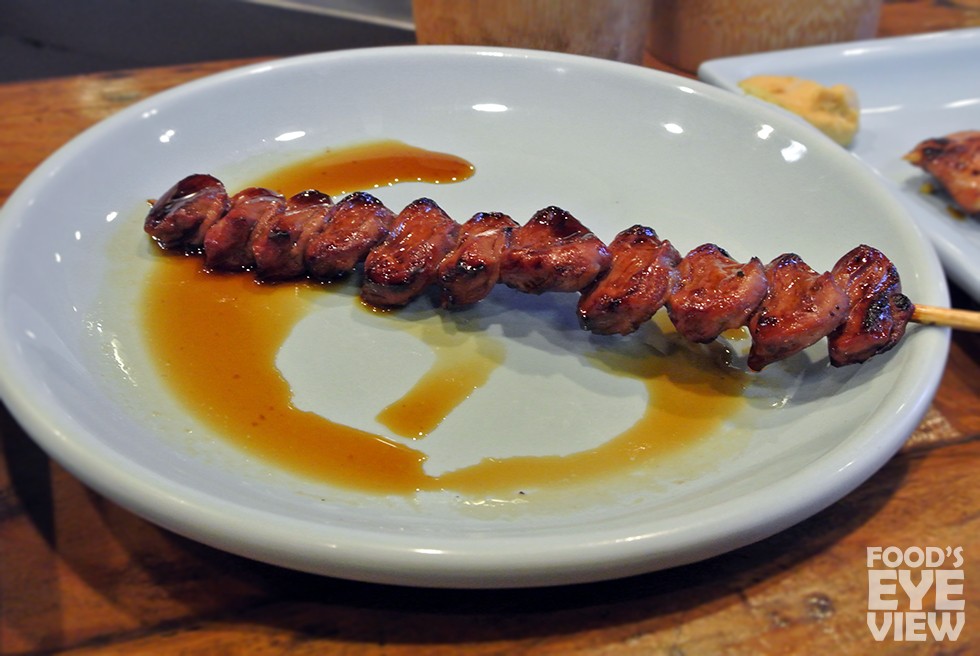 As far as I know chickens only have one heart, but Kokekokko offers 2-3 types of “special” heart, which I’m guessing refer more to the marinade preparation than any secret organ. These were the regular variety and were unquestionably the best that I’ve had; not at all chewy and reminded me of a soft piece of red meat. 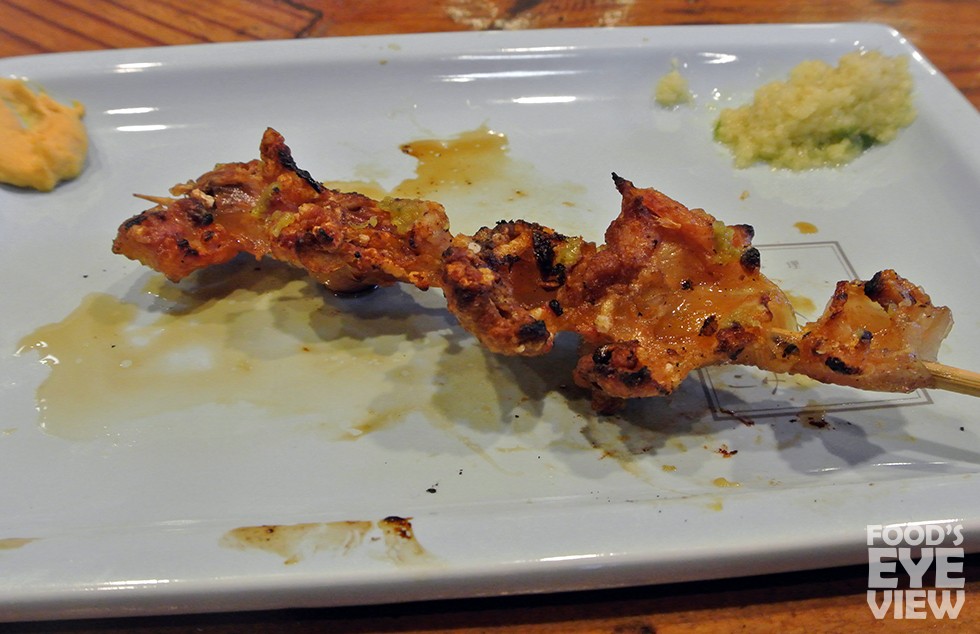 This was one of the off-menu items I that was lucky enough to try and it was a real treat. The shin was spectacularly crispy with a crunchy-fatty interplay that made it one of the best bites of the meal. The shin also had a nice char on some of the ends which went well with the tiny smears of yuzukosho applied post-grilling. 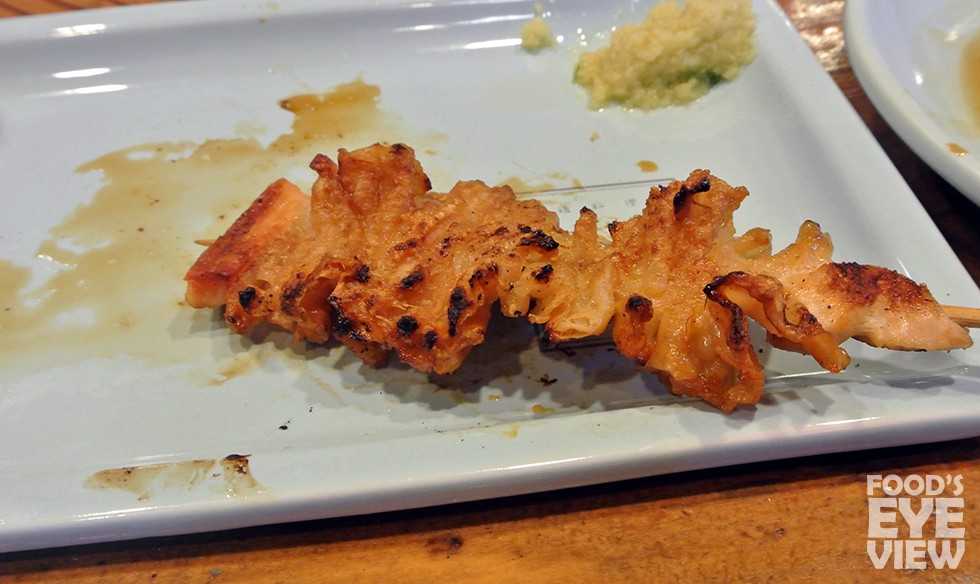 Skin has always been one of my favorite yakitori items and the fact that it was an off-menu selection here really had me excited. While it was certainly a solid preparation, it didn’t stand out as better than the version at Shin Sen Gumi, for example. I found it to be a little too crispy and lacking the fatty, gelatinous quality that I enjoy so much. 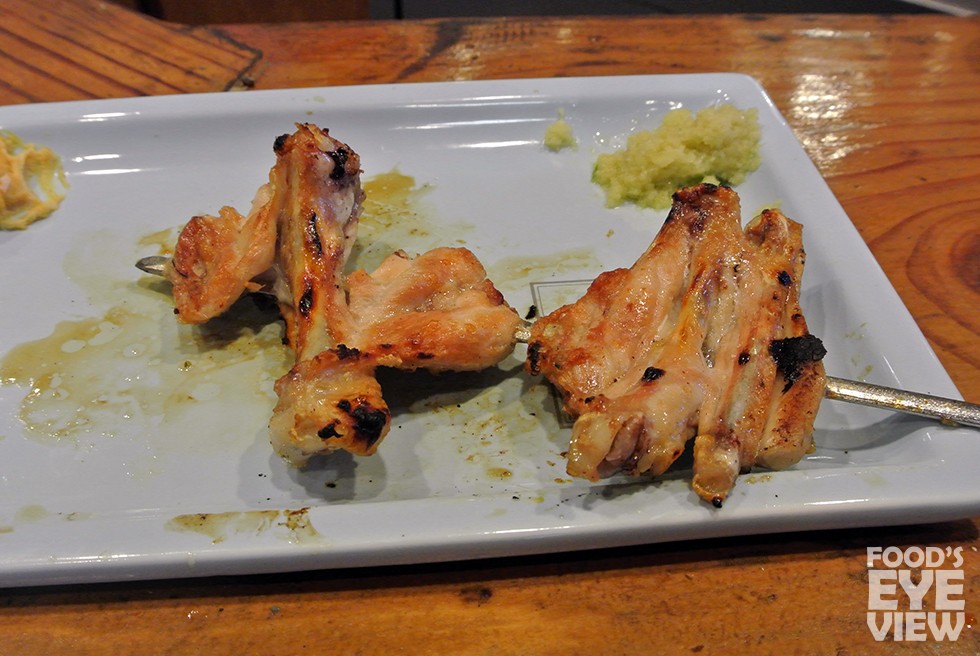 With all the odds ‘n ends of the bird I had eaten up to this point, the wing was a familiar sight. It was extremely flavorful, if a bit salty, and showed off a nice smokiness from the grill. The lack of any real marinade or seasoning served to highlight the pure chicken essence, something that you won’t get at your local wing spot. 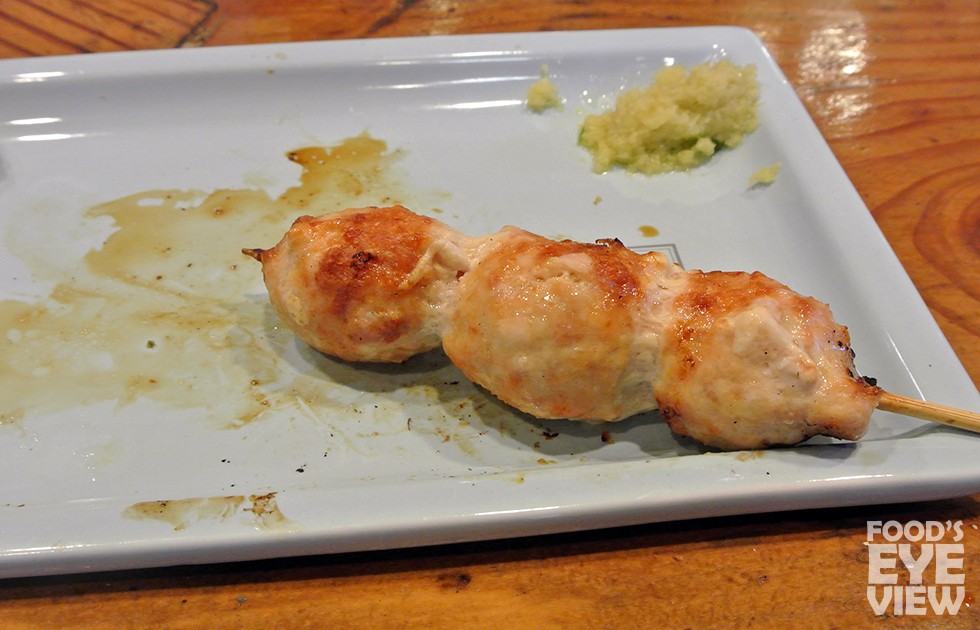 Nothing but ground white meat inside these savory spheres that were plenty moist and smoky. Good enough on their own, I found that adding some heat via the shichimi togarashi took these to the next level. 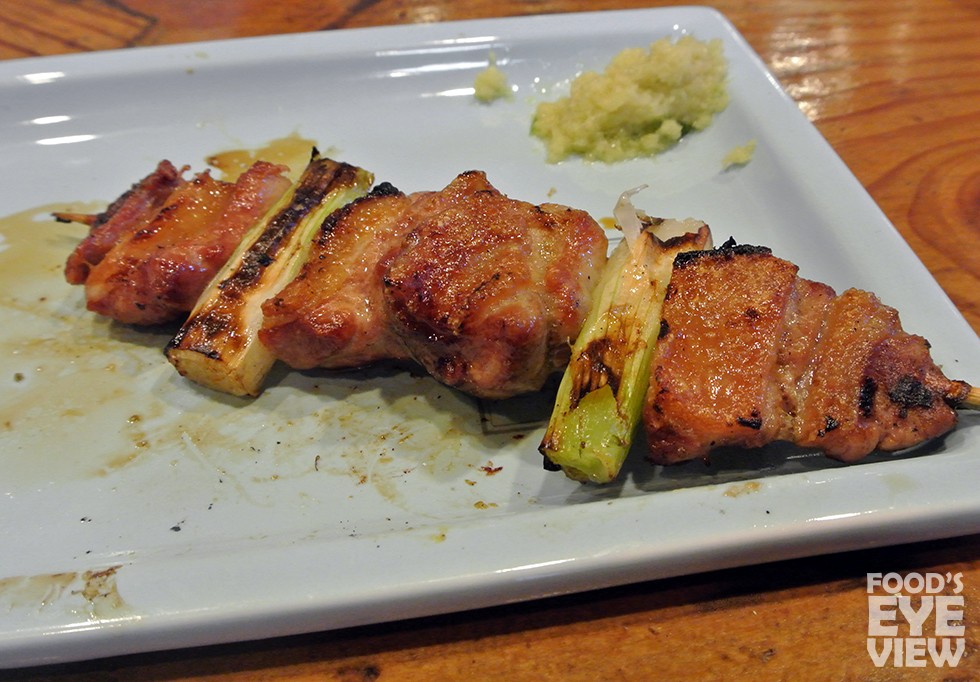 I initially heard “dark thigh” when this skewer was served (the redundancy of dark thigh meat should’ve clued me in) but quickly realized it was “duck thigh”. The layer of skin took on a beautiful caramelized color and the meat was supremely succulent. The charred leeks in between imparted a bitterness that countered the fatty richness of the duck. 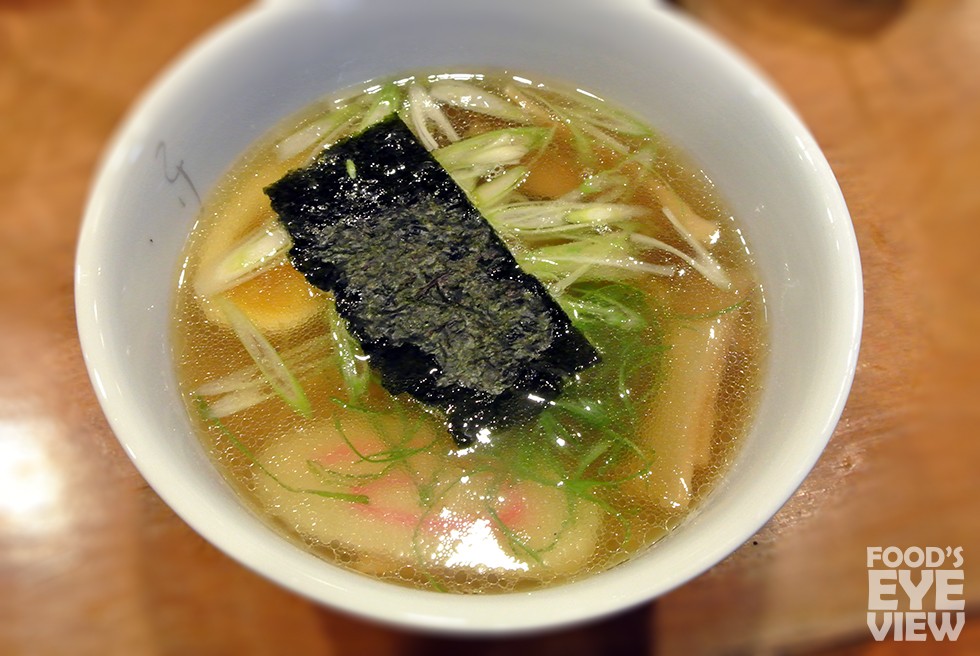 Seeing as how pork-based ramens rule the genre, I had to take advantage of the chicken-centric bowl available here. The broth was light and “clean”-tasting in contrast to the richer, fattier tonkotsu styles. A sheet of nori, green onion slivers, bamboo shoots, fish cake, and a soft-boiled egg were on hand in addition to thin, medium firmness noodles. I was most pleased with the firm piece of duck meat lurking at the bottom of the bowl that took the place of the chashu you’d find in a pork ramen. 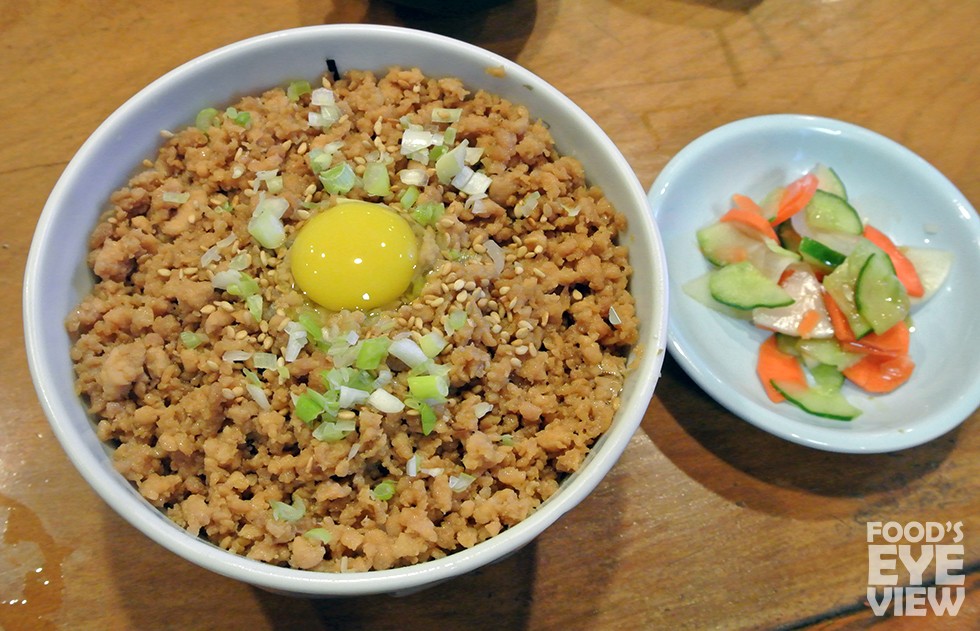 For what’s basically a ground-chicken rice bowl, this was really, really exceptional. The chicken itself, a touch sweet, wasn’t even the main attraction here; the combination of warm rice, creamy yolk, and finely shredded seaweed, when mixed with the top layer of chicken, was comfort food at its finest. With all of the other food, the small bowl was more than enough for two people to share.

Everything else aside, I was thoroughly impressed with the quality of yakitori on hand at Kokekokko. While most places offer a wider variety of skewer items, I appreciated the focus on just chicken (yakitori literally means “grilled chicken”) here and felt like there was a high level of respect for the ingredient from Tomo-san and his staff. While I can understand how the preferential treatment shown to certain customers is a turn-off for some people, I actually found it quite endearing, no different than a sushi chef pulling out a small amount of seasonal shirako for a longtime customer with no intention of serving it to anyone else. I’ve always supported kitchens who enforce a strict no modification/substitution policy and the way that Tomo-san plays favorites is a fundamental ideal I think all chefs hold dearly to: my kitchen, my rules.