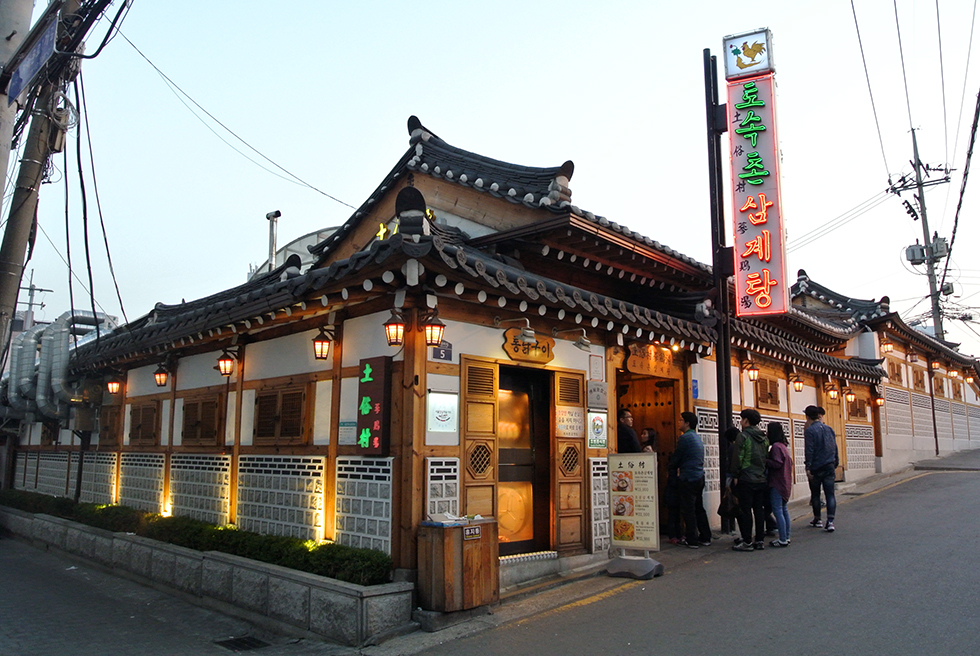 After a historically informative tour through Gyeongbokgung Palace and a stroll along Cheonggyecheon stream, it was time for a proper first meal in Korea. With all the Korean food I eat on a regular basis it was ironic that the speciality of our destination was a dish that I had very little experience with back in LA’s Koreatown. Samgyetang is basically a Korean chicken soup featuring an entire small chicken stuffed with glutinous rice, ginseng, jujubes, ginger, garlic and other medicinal herbs. I’ve noticed that Koreans in general are really into the purported health benefits of their food (probiotics in kimchi I get, pork belly and duck fat I’m a bit more skeptical about) and this supposedly nutrient-packed soup is no different, revered for its believed curing and preventive properties against common ailments.

There’s plenty of places to find this soup in Seoul, but few, if any, are as popular and well-regarded as Tosokchon. The palace-like design of the exterior looks straight out of nearby Gyeongbokgung with the intricate detailing along the roof and wood paneling, and the inside is equally traditional including a room where floor-sitting is required. Shortly after being seated, a line began to form and quickly snaked out the door and onto the street. 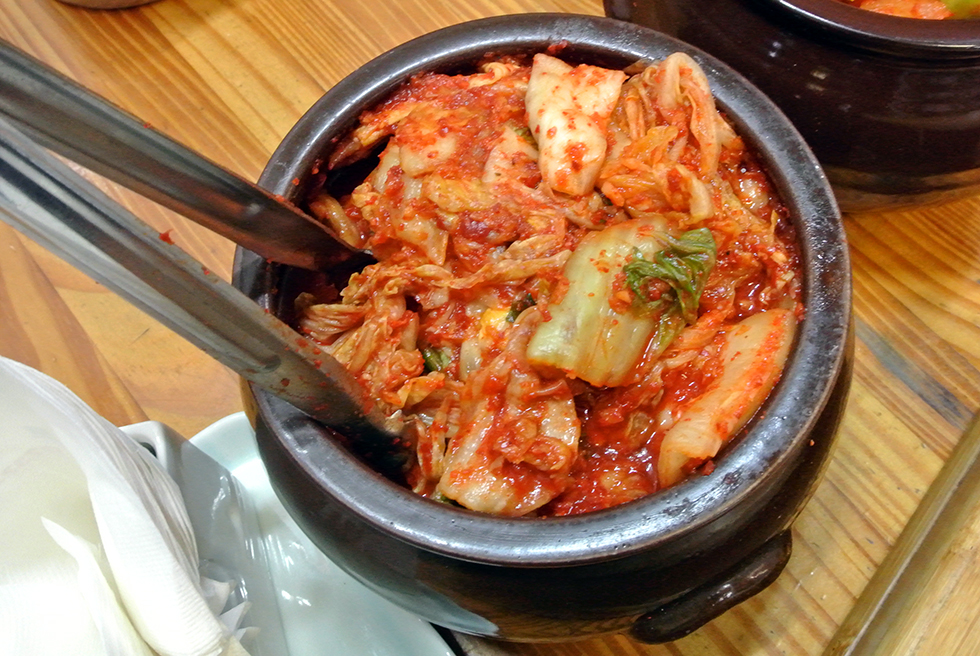 Kimchi was already waiting for us in a large pot on the table. What it lacked in the sour, truly fermented department it more than made up for with a heavy dose of garlicky-spice. I took advantage of multiple servings throughout the meal with complete disregard for what it would mean for my breath the rest of the night. 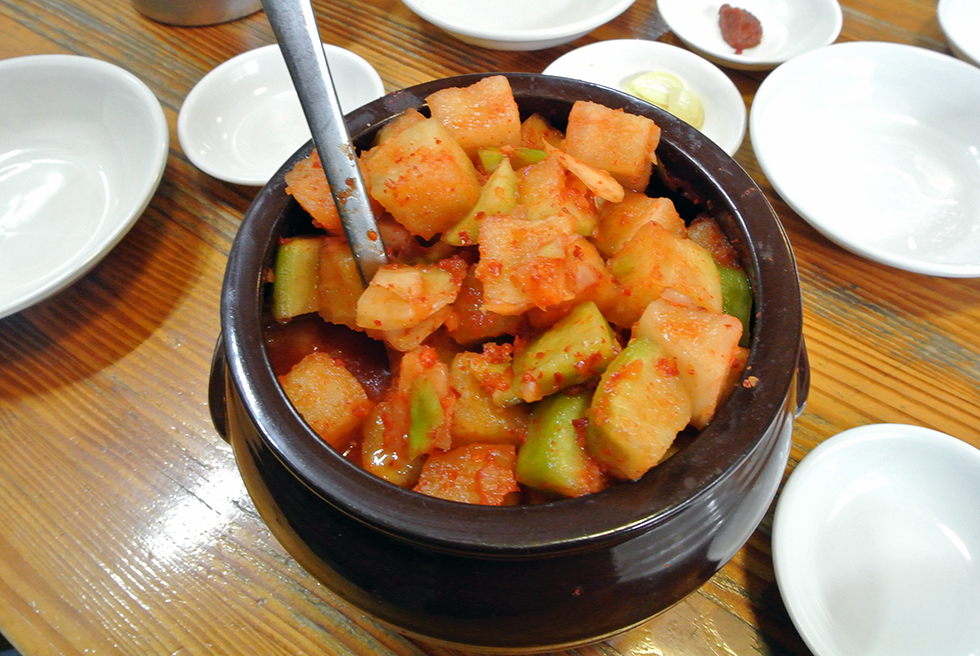 Also on the table was kkakdugi, or kimchi made with cubed radish instead of cabbage. The satisfying crunch and slight heat proved a good compliment to the soup that was to come. 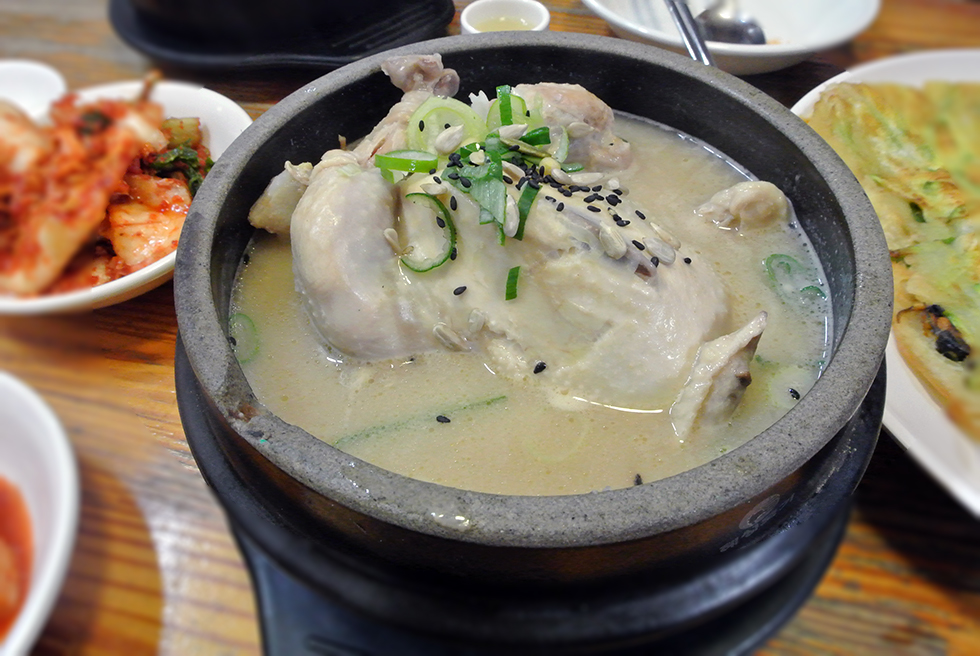 It wasn’t just the wear and tear of travel talking when I say that the samgyetang hit the spot. The broth was creamy and rich, as only a day of slow-cooking can achieve, while the chicken was tender and easy to separate into pieces, revealing the rice stuffing within. Though the meat itself didn’t carry a lot of flavor, the rice and various herbs and roots more than made up for it. 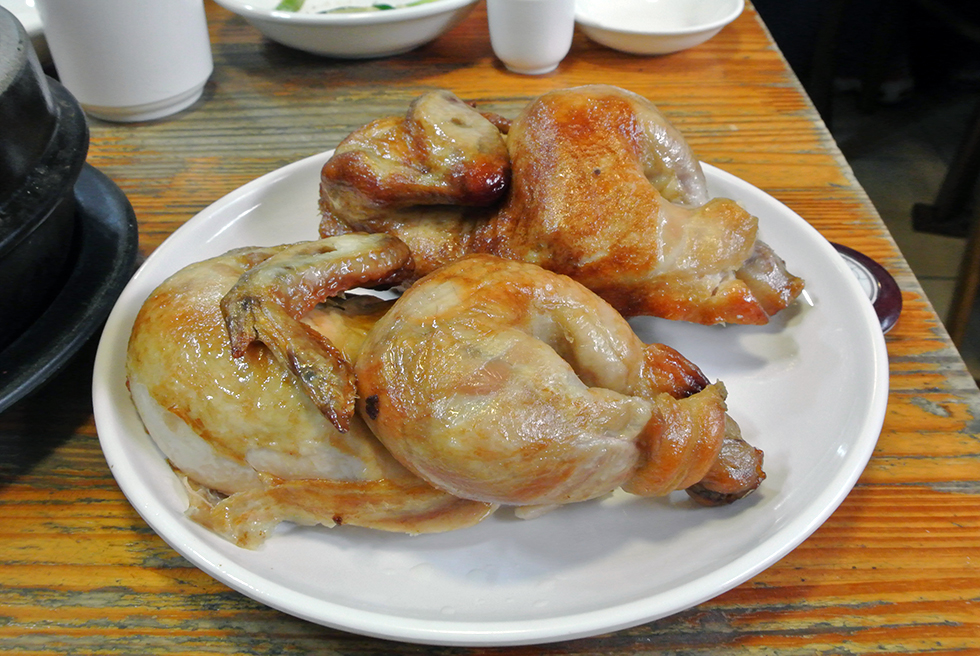 As if one whole chicken wasn’t enough, another, larger bird arrived straight from the rotisserie. Minimally seasoned, the best part here was the crispy, golden skin, though the meat was enjoyable with a sweet-chili dipping sauce served on the side. 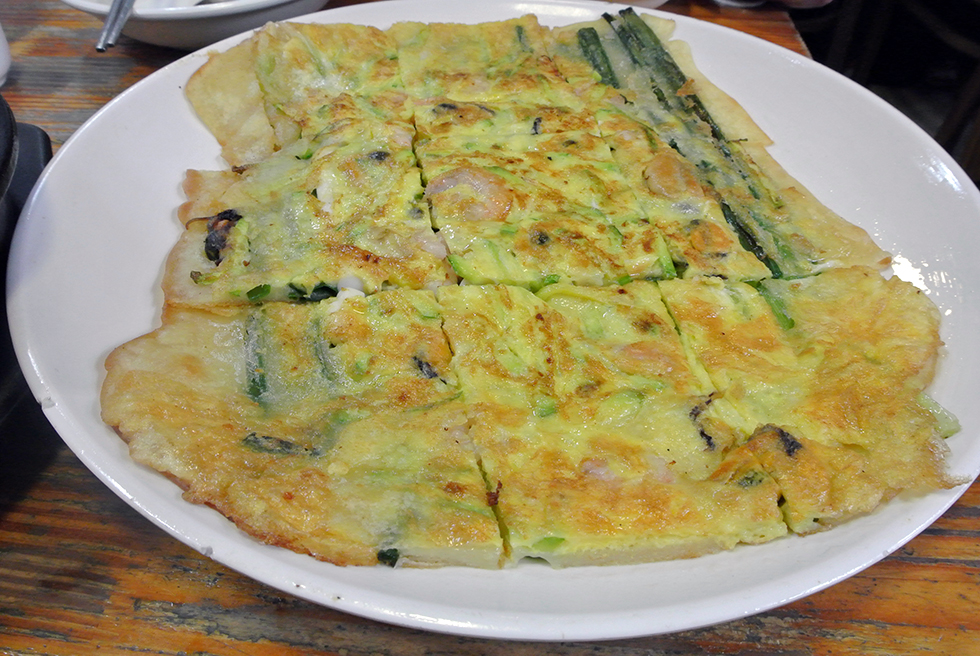 Finally, a seafood pajeon studded with shrimp, mussels and lots of green onions showed up. Thinner and without the same crunch as the varieties I’m used to eating in Ktown, it was satisfying all the same when dipped in the soy and vinegar based sauce that mellowed some of the pancake’s oiliness.

I left Tosokchon full and quite content (the soju probably helped as well) with this first meal in Seoul.  Despite not having much to compare the samgyetang to, it was unquestionably the strongest example I’ve tasted to date, clearly the result of many years of perfecting the recipe and technique. I can see why it’s deemed one of the best in the city by locals and tourists alike. The other dishes were on point as well, particularly the kimchi and seafood pancake After a grueling day of travel I was made a believer of the soup’s restorative qualities and was eager to delve deeper into Seoul’s food scene.